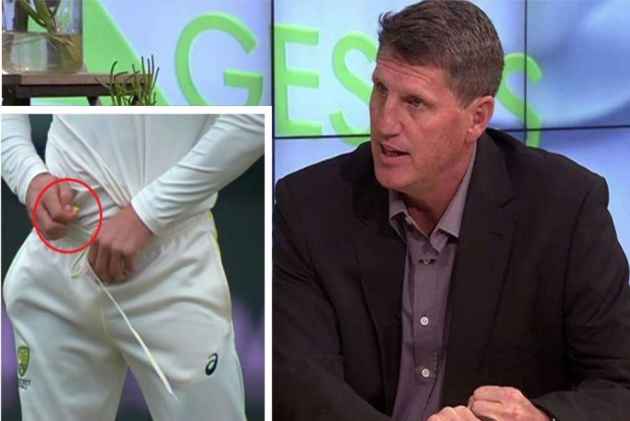 It’s not usual for a bowler to get reverse swing as early as 26th or 27th over in a cricket match on South African surfaces. But Australian bowlers were doing that with ease on the third day of the third Test match against South Africa in Cape Town.
Even in the second Test South African batsmen complained to umpires that David Warner was using tape on his hand to rough up the ball. That is when commentator and former South African Test fast bowler Fanie de Villiers sensed that Australia may have been doing something untoward with the ball, he told RSN Radio.
The Australian reported that from that point South Africa’s SuperSport network had been tracking the ball during its path from wicketkeeper Tim Paine to the bowler that eventually managed to capture Cameron Bancroft’s disgraceful act in Cape Town.
“I said earlier on, that if they could get reverse swing in the 26th, 27th, 28th over then they’re doing something different from what everyone else does,’’ de Villiers told RSN Radio.
Ultimately his suspicions proved to be correct, with cameras spotting Australian fieldsman Cameron Bancroft's now-infamous yellow tape, leading to Bancroft hiding the tape in his pants before ultimately coming clean alongside then captain Steve Smith. "I said earlier on, that if they could get reverse swing in the 26th, 27th, 28th over then they are doing something different from what everyone else does," de Villiers told RSN Radio on Monday.
"We actually said to our cameramen, 'go out [and] have a look, boys. They're using something.' They searched for an hour and a half until they saw something and then they started following Bancroft and they actually caught him out at the end.
"It's impossible for the ball to get altered like that on cricket wickets where we knew there was grass on, not a Pakistani wicket where there's cracks every centimetre.
"We're talking about a grass-covered wicket where you have to do something else to alter the shape, to alter the roughness of the ball on the one side. You have to get the one side wetter, heavier than the other side," he said.
Following the ball-tampering fiasco, Steve Smith stood down as Australia captain and was banned for one Test by the ICC and fined 100% of his match fee.
On Monday, Smith also stepped down as captain of Rajasthan Royals in the upcoming season of the Indian Premier League (IPL). Right-hand Indian batsman Ajinkya Rahane will replace Smith.
AFP reported that the Cricket Australia on Wednesday might throw the book at Smith and David Warner by banning both for 12 months and sending them home in disgrace.
Lehmann has remained silent since the furore, but Britain's Daily Telegraph said he had decided to quit, effective immediately, meaning he too will play no part in the Test.
Lehmann took over the coaching reins in 2013 when predecessor Mickey Arthur was sacked, with Justin Langer considered a frontrunner as his replacement although Ricky Ponting will also be in the mix.