The ongoing Federation Cup in National Institute of Sports (NIS) Patiala is serving as a 2020 Tokyo Olympics qualifier. Watch Dutee and Hima in action, live 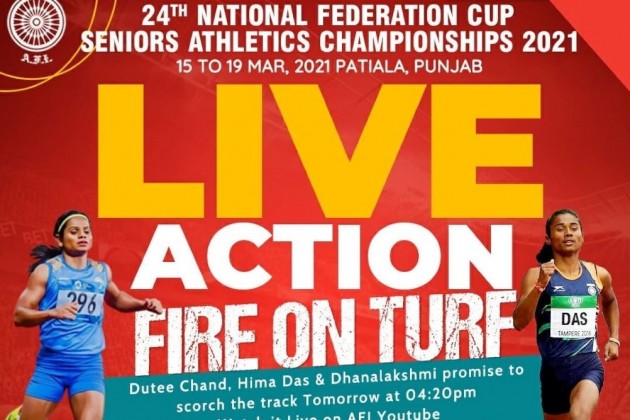 The Federation Cup is being held from March 15 to 19 The 5-day event will see 38 events and 600 athletes in action.

With the Tokyo qualification still on, this event is also serving as an opportunity for athletes to attain Olympic qualification standards. Hima and Dutee will clash at 4:20 PM IST.


Duttee Chand needs 11.15 seconds to make the cut for the Olympics, while Assam’s DSP Hima Das, who will be competing in 200m as well, will also be in action. Giving these seasoned athletes a challenge will be Tamil Nadu’s S Dhanalakshmi.

Dhanalakshmi produced a stunning race in the women’s 100m semifinals. She threw down the gauntlet for Dutee Chand (Odisha) with an 11.38-second sprint.

Taking to the track after Assam’s Hima Das won her heats in 11.63 seconds, Dutee Chand clocked 11.51 without straining too much.

While  Annu Rani bettered her own javelin throw national record but still missed the Tokyo Olympics qualification mark by more than half a metre.

When and where to watch the Federation Cup live

The live streaming of the Federation Cup is available on the Athletics Federation of India’s (AFI) official YouTube channel.