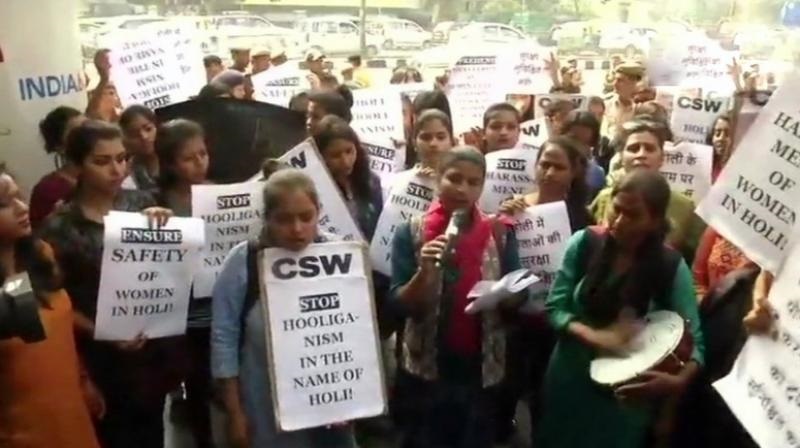 The victim said she was on a bus traveling from the Sagarpur colony bus-stop to her house in Dwarka on Wednesday when some boys threw a semen-filled balloon at her chest. The student has not lodged any FIR yet, reported The Indian Express.

Speaking to the newspaper, the student said she didn't get any help from the people on the bus. She claimed that people in the bus closed the windows, while some started laughing immediately after the incident.

So the festival of ‘fun’ is here! Time for colors, eggs, dirty water and oh how can I forget the most important one- SEMEN.

It was just another usual day of traveling back home from college..
The bus stopped a little after Sagarpur bus stop. And that’s when it happened.
Before I even realized it, a guy threw a balloon filled with semen straight at my chest. For a few minutes, I was just shocked and by the time I recovered from it, he and his friends were gone. I was DISGUSTED and really furious. And that’s when a lady sitting in front of me said, “Beta, Bura mat mano Holi hai” And the others in the bus laughed and said the same to me. I didn’t know whom to be more disgusted on- the idiot who threw it or the crowd who normalized it.

Until yesterday, I had just heard about semen throwing at girls and my heart was broken to hear it.
Today I was the victim of it and that was when I wholly realized and understood the absolute depravity of human beings.
I would have said humans behave like animals but then that’s a disgrace to animals in itself.

Yesterday, it was a girl from LSR, Today it was me, and there are plenty of girls with whom this is happening, who are just too afraid or embarrassed to speak up. And I don’t blame them but then if we don’t speak up now, these fools roaming around our country will continue doing the same and God forbid another innocent girl might get targeted.

And to all the girls out there,
Do not be afraid to speak up when such things happen to you. Your dignity and self Respect is important and not something to be fooled around with.

Be bold and take a stand, rest assured there are many like me who will have your back.”

On Thursday, students and teachers protested against the cops at Delhi Police Headquarters(ITO)for their inability to control hooliganism during the festival.

Earlier, a BA history student of the college had also alleged "semen-flinging" in the morning at the Old Double Storey area near Amar Colony.

Based on a complaint received from the students, the police were looking into the issue, an official attached to the Amar Colony police station had said.

"One of our friends was hit by three balloons at around 8 pm. She called us for help. We told the police about the house from which the balloons were thrown and demanded immediate action," a student, who requested not to be named, told PTI.

After the police intervened, the residents of the house, from where the balloons were thrown, issued a written apology that said, "An incident of ballooning happened from the roof of our two-storied quarters in the absence of any men at home. We assure you that we will try to ensure that no such incident happens in the future."

The students demanded immediate action. They also announced an agitation and a march near the college, condemning the incidents.

Five days ago, a student of the same college had alleged "semen-flinging" and narrated her experience on the social media.