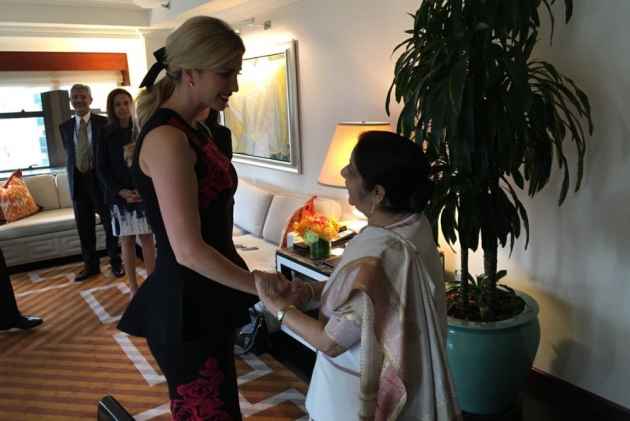 After the meeting, Ivanka took to Twitter and said that she has always respected Swaraj, adding that the EAM was charismatic and accomplished.

"I have long respected India's accomplished and charismatic Foreign Minister @SushmaSwaraj, and it was an honor to meet her today," Ivanka tweeted.

I have long respected India's accomplished and charismatic Foreign Minister @SushmaSwaraj, and it was an honor to meet her today. #UNGA https://t.co/IeAfBCOETO

Ivanka discussed the issue of women empowerment with Sushma Swaraj.

Ivanka, will lead the U.S. delegation to India for the Global Entrepreneurship Summit (GES 2017) in November this year to support women's entrepreneurship globally.

Responding on Twitter, Ivanka had said, "Honored to lead the US delegation to #GES2017 in India & meet with Prime Minister Modi & passionate entrepreneurs from around the globe!"

Prime Minister Narendra Modi had invited Ivanka to visit the country during his meeting with President Trump in Washington in June at the White House.

Prime Minister Modi confirmed Ivanka's impending visit on his own account, tweeting that he was looking forward to her trip to India.

"Look forward to Ms. Ivanka Trump's presence at #GES 2017 Hyderabad as the leader of the US delegation," Modi tweeted last month.

The U.S. and India will co-host the three-day summit in Hyderabad that aims to present entrepreneurs a platform to meet startups and global leaders from across the world. (ANI)