The National Conference leader said there were attacks taking place in broad daylight in the Kashmir valley and militancy was back again in those areas which were made militancy-free during his regime. 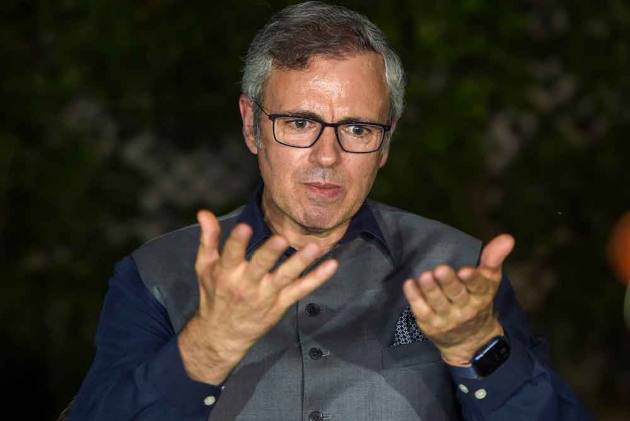 National Conference vice president Omar Abdullah alleged on Tuesday that the present administration in Jammu and Kashmir has "completely failed" in controlling the situation and in providing a sense of security to the people.

Abdullah's remarks came after a sensational attack on a police bus in the Zewan area of the city here on Monday in which three personnel were killed and 11 others injured. "It (attack) is another sign towards the present situation. The reality is that the present administration has completely failed in controlling the situation and in providing a sense of security to the people," he told reporters here in the central Kashmir district after addressing a party convention.

The National Conference leader said there were attacks taking place in broad daylight in the Kashmir valley and militancy was back again in those areas which were made militancy-free during his regime. "During my rule, we were feeling so comfortable with respect to the security situation that we had removed bunkers from many places. But, the reality today is that, not only have the bunkers been put up in those areas, but there are additional bunkers now,” he said.

"We reduced the footprints of the security forces, but today, there are additional troops deployed. And, forces are being stationed in places like community halls which were constructed in our regime. Be it development-wise or through the security point of view, the present government has totally failed,” Abdullah said.

Asked about the conventions being organised by the party, the NC vice president said the party rallies should not be linked with polls. "This is not an election campaign.This is our way of connecting with our workers, to listen to them, interact with them and get their feedback. This is our aim behind these conventions and they should not be connected with the elections,” he said.

Asked whether he would contest polls from Ganderbal, Abdullah said he had not come here to “cut somebody's mandate or to give mandate to someone”. "When the election bugle hasn't been blown yet, why talk about mandate,” he said. Earlier, while addressing the party workers, Abdullah said the BJP had "touted" across the world that the guns in Kashmir would fall silent once Article 370 is revoked, but the violence was still going on even after its revocation.

"We were told that there would be complete peace after its revocation. This was touted across the world that the gun in Kashmir is because of (Article) 370 and when it is revoked, the guns will fall silent. See the situation in Srinagar in the last 24 hours,” he said.

"What happened in Rangreth, what happened in Zewan? Our brave police officers and jawan – three were killed and I do not know how many of them are critical in hospitals. If (Article) 370 was the reason behind the gun, then why did this attack take place in Zewan or an encounter in Rangreth or killings in Hyderpora,” Abdullah said.

He said the BJP claimed the peoples' anger in Kashmir was due to Article 370 and when it is done with, the separatist ideology will also go away. "On Monday, two PSOs of two BJP leaders decamped with their weapons,” Abdullah said, referring to the Kupwara incident. The former Jammu and Kashmir chief minister said the BJP took “unfair advantage” of the NC's weakness.

"I used to tell people from time to time that do not let your votes be divided or else your voice will be weakened. If you do not like the NC, then support another party, but do not let the votes be divided. Unfortunately, and it was Delhi's continuous conspiracy, that we are divided in the name of one party or the other,” he said.

Abdullah said the Centre's attempts were still on. "You see a new party every day and every one of them targets the National Conference. Rather than oppose the present dispensation or the Centre, they target the NC only so that we are disintegrated,” he said.

He said the idea behind the formation of the People’s Alliance for Gupkar Declaration (PAGD) was to keep the voice of the people united. "That is why Farooq Abdullah got every leader on a single stage and formed the PAGD. The aim was not chair or power or that someone from them will become the chief minister. The aim was to unite our voices. But, even this was not liked by some. First they joined and then they left,” he said, apparently referring to Sajad Lone who quit the alliance.

Asking people to take lessons from the people of Leh and Kargil, the NC leader said while they first celebrated after the revocation of the erstwhile state's special status and its bifurcation, “now they are protesting as they want statehood, assembly and all rights as were under the Article 370”.

"Today, they are united in their voice. There was a complete shutdown. We also want that our voice is not disintegrated. But, there is the Centre's conspiracy and thinking by some people that only they should go forward. We never said only one party or family had the right over power. We are still trying to keep our voice united and keep a united front for securing our rights and to get back what was taken from us on August 5, 2019,” he said.