Tytler was seen leaving stage occupied by senior party leaders after having a conversation with Delhi Congress chief Ajay Maken. 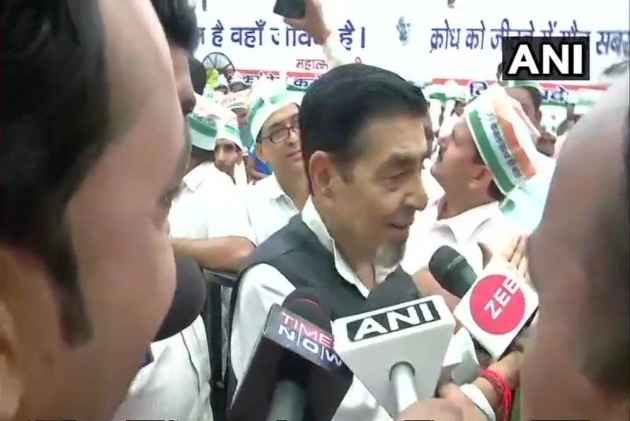 Senior Congress leaders Jagdish Tytler and Sajjan Kumar were on Monday allegedly asked to leave New Delhi's Raj Ghat, where their party is staging a protest and hunger strike over atrocities on Dalits, sources told ANI.

Sources say JD Tytler & Sajjan Kumar were asked to leave Rajghat, where the Congress party is staging a protest and hunger strike over atrocities on Dalits. #Delhi pic.twitter.com/HDlodke0GJ

"This is dharma of a party and not an individual. They did not fit the criteria," said Congress leader Arvinder Lovely, reported News18.

Tytler is an accused in the 1984 anti-Sikh riots in Delhi that took place in the aftermath of the assassination of former Prime Minster Indira Gandhi.

Congress president Rahul Gandhi is leading a protest at the Raj Ghat as part of a nationwide "fast" of the party to protest against the Narendra Modi government and non-functioning of Parliament.

Congress workers is holding a day-long fast at all state and district headquarters to protest against the BJP government and promote communal harmony and peace across the country.

Delhi: Congress president Rahul Gandhi arrives at Rajghat, where the Congress party is staging a protest and hunger strike over atrocities on Dalits. pic.twitter.com/2rQQqzN58Y

In the national capital, party workers are protesting against the government and its failure to hold discussion in Parliament on key issues such as the CBSE paper leak, the multi-crore PNB scam, Cauvery issue and Special Category Status to Andhra Pradesh.

The Congress will also take up issues related to alleged dilution of the SC/ST Act, farm distress and disillusionment among the youth.

The BJP has also announced that its MPs will observe a fast on April 12 to protest the impasse in Parliament.