Rahman is joined by Indian hockey players and celebrities like Shahrukh Khan, Sivamani, etc. in the video. 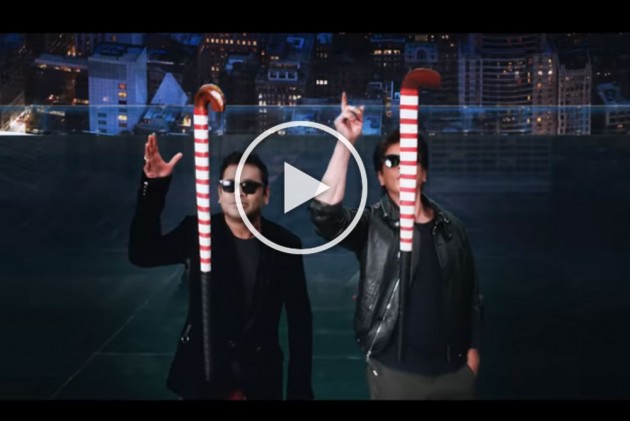 The 51-year-old wrote in a Twitter post, "Presenting the promo for 'Jai Hind India' the song for Hockey World Cup 2018 with @iamsrk and wonderful musicians who have collaborated for this track".

Presenting the promo for 'Jai Hind India' the song for Hockey World Cup 2018 with @iamsrk and wonderful musicians who have collaborated for this track. https://t.co/MqzMPZGUXG@nupur_mahajan @Naveen_Odisha #HeartBeatsForHockey #AbBasHockey #HWC2018 #BToSProductions #Nayanthara

The lyrics of the track, titled "Jai Hind Hind, Jai India", has been penned by the veteran lyricist Gulzar.

Rahman is joined by Indian hockey players and celebrities like Shah Rukh Khan, Sivamani, etc. in the video.

"Nothing says India more than our beloved sport - hockey. And nothing is more exciting than the world's biggest hockey tournament happening right here, on our turf, the Odisha Hockey Men's World Cup, Bhubaneswar 2018," Rahman said in a statement in September.

"It's heart-warming to see the entire nation pledge their heartbeats for hockey. As an extension of pledging our heartbeats, Gulzar Sahab and I have created the World Cup Song. A song that will excite and inspire, as also get you on your feet. Join me in this celebration of hockey — of not just our men in blue but the spirit of the game, the spirit of universal oneness," he added.

The 2018 Hockey World Cup will be held in Bhubaneswar from November 28 to December 15. A total of 16 countries are participating in the 14th edition of the tournament. This is the third time India is hosting an event after having organised it in 1982, Mumbai and 2010, New Delhi.