'All ploys and disturbances have failed to shake the strong support and trust that the people have showered on the Narendra Modi government,' Nadda said, hitting out at the Maharashtra government for targeting Union Minister Narayan Rane. 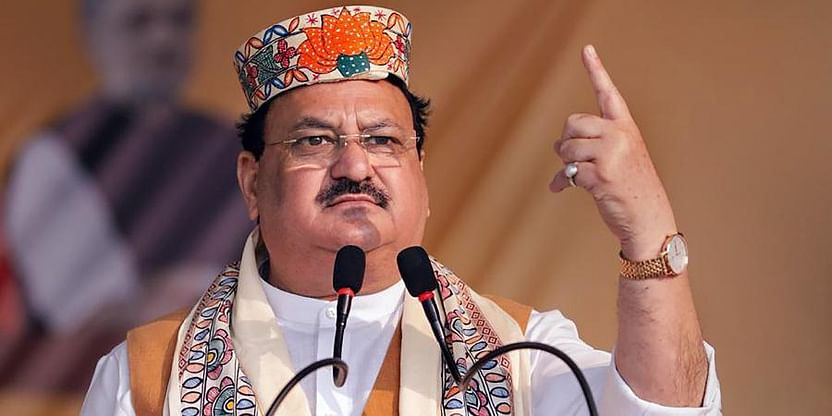 Praising the  the highly successful Jan Aashirwad Yatra,  BJP President J P Nadda on Saturday  said that the  massive public outreach has left the opposition “disturbed and nervous”, along with condemning them for their endeavours to hinder the programme.

In a statement, Nadda said that people continue to show "unflinching support and trust" in the Modi government.

"All ploys and disturbances have failed to shake the strong support and trust that the people have showered on the Narendra Modi government," Nadda said, hitting out at the Maharashtra government for targeting Union Minister Narayan Rane.

Rane was arrested by the Maharashtra Police for his comments against Chief Minister Uddhav Thackeray while on the Yatra.

"It is a direct attack on our democratic system but people's support forced all narrow-minded opposition parties and our political adversaries to retreat,” Nadda said.

"The highly successful ‘Jan Aashirwad Yatras‘ across the country has left the opposition parties disturbed and nervous and they unsuccessfully tried to
disturb and create hindrances in our Yatra and programmes.”

The BJP president added that people have rejected the "negative political agenda" of opposition parties and have stood strongly with the politics of development and growth.

The Yatra, which began on Independence Day and continued till August 28, covered more than 24,000 km in 14 days in which over 5,000 programmes were organised.

"All these programmes were highly successful which also ensured enthusiastic participation of people from all walks of life," the BJP president claimed.

People have lauded all-round development and progress under the Modi government whose "pro-people and pro-poor" policies and programmes have touched the lives of all sections of society, he said, adding that it has taken several initiatives to boost India's security and safety.

"The last seven years of India under the dynamic, decisive and foresighted leadership of Modi has been that of people's participation, development, trust, security, prosperity and growth," he said.

"The tremendous success of the Jan Aashirwad Yatras is also proof of the
'Vikas Yatra' that the country has seen under the dynamic and decisive leadership of the prime minister and the trust and support of all his Cabinet ministers," Nadda added.

He said the BJP and Modi are committed to and firm on providing benefits of all social welfare and economic welfare schemes to every section of society, particularly to those who have been left behind in the race of growth and development.

At a press conference later, BJP spokesperson Sudhanshu Trivedi said the Yatra was more successful than their expectations while lauding Modi's and Nadda's leadership.

The programme was a direct interaction between the new ministers and people, he said.

While the opposition has tried to grab votes by stoking discord and division in the society, the BJP under Modi has practised the politics of "sabka saath, sabka vikas, sabka vishwas" for the nation's development, Trivedi said.