Setting off six streams of the poll campaign tour in a replication of the party’s Parivartan Yatra ahead of the 2017 assembly polls in which the BJP had won 325 seats, all the six leaders, including Defence Minister Rajnath Singh and Uttar Pradesh Chief Minister Yogi Adityanath, largely targeted the party’s key contender Samajwadi Party. 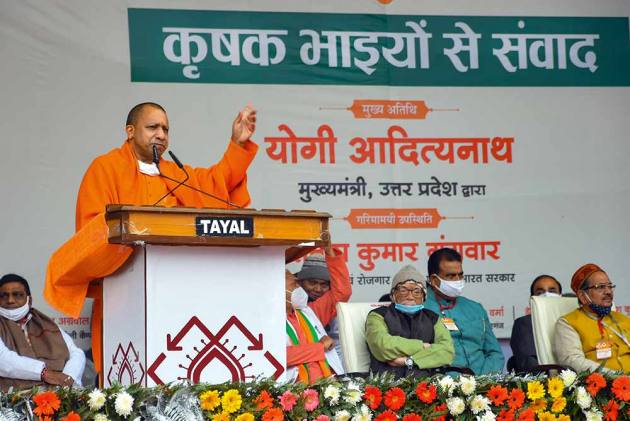 A galaxy of six senior BJP leaders on Sunday simultaneously flagged off the party’s "Jan Vishwas Yatra" from six places in Uttar Pradesh to reach out to people in all 403 assembly constituencies of the state and win their trust ahead of the upcoming polls.

Setting off six streams of the poll campaign tour in a replication of the party’s Parivartan Yatra ahead of the 2017 assembly polls in which the BJP had won 325 seats, all the six leaders, including Defence Minister Rajnath Singh and Uttar Pradesh Chief Minister Yogi Adityanath, largely targeted the party’s key contender Samajwadi Party. How can a person increase his property by 200 per cent in five years, asked Adityanath while flagging off the party’s poll campaign tour from Mathura as Rajnath Singh, launching it from Jhansi, asserted that Yogi, which means the practitioner of Yoga, will make the SP do a “sirsasan” (headstand) in the upcoming polls.

Setting off the party’s ‘yatra’ from Bijnor along with UP Deputy Chief Minister Keshab Prasad Maurya, Union Transport Minister Nitin Gadkari dubbed the state’s growth in the last five years as "only a trailer" of Adityanath’s developmental work and urged people to be prepared to see the whole film of state’s growth by voting him to power yet again. Launching the ‘yatra’ from Ambedkar Nagar, BJP president J P Nadda dubbed the SP as “synonymous with corruption, injustice, atrocities and misconduct” as Union Minister Smriti Irani, launching flagging it off from Ghazipur, cautioned people to keep the “cycle and elephant parties” at bay to insulate them from “goonda raj”.

Cautioning people that SP supremo Akhilesh Yadav who “betrayed” his father and “duped” his uncle was now out to “cheat” the people, Madhya Pradesh Chief Minister Shivraj Singh Chouhan, while flagging off the yatra from Ballia,  exuded confidence that the BJP would win more than 300 assembly seats. It may even reach the 400-mark, he asserted.

How can one increase his property by 200 per cent in five years, asked Adityanath in Mathura, referring to Income Tax sleuths raids on various SP leaders houses and offices? Asserting that the people and parties with “narrow visions” are not able to see his government’s “developmental model”, Adityanath said, “They did not like meat and liquor shops being shut in Mathura and the twin temple town of Mathura and Vrindavan becoming a municipal corporation”.

“What they like is the cow slaughtering and freeing terrorists from jails,” said the UP chief minister, referring to the SP government’s move to withdraw cases against some jailed terrorists during fag end of its tenure. Resorting to cricket terminology, Defence Minister Rajnath Singh asserted in Jhansi that no opposition party in UP would be able to withstand the “developmental all-rounder” Adityanath’s “inswingers and outswingers” in the upcoming assembly polls.

Counting the abrogation of Article 370 in Jammu and Kashmir and the ongoing construction of the Ram temple in Ayodhya among the BJP recent achievements, Singh said, “I admit that the Supreme Court judgement has paved the way for its construction.” “But it seems even gods wanted it to be built at a time when both the Centre and the state were to have BJP governments,” he remarked.

Taking pride in the expeditious construction of UP’s 16-lane showpiece Delhi-Meerut Expressway of international standard, Union Transport Minister Gadkari said in Bijnor, “I wonder if there were potholes on roads or roads through potholes in UP five years ago.” “UP has been able to build more highways and expressways in last five years than all the roads built here in last 50 years,” said Gadkari, counting among others, the construction of Poorvanchal Expressway, Bundelkhand Expressway, Delhi-Dehradun Expressway and upcoming Ganga expressway in UP.

He said UP is blessed with a double-engine growth ensured by those of the Modi government in the Centre and the Adityanath government in the state and urged people to ensure that this arrangement is not disturbed. In Ballia, MP CM Chouhan accused the Congress of foisting a wrong history of the country on the people limiting it to Gandhi, Nehru and Indira Gandhi and blacking out those of Subhash Chandra Bose, Sardar Bhagat Singh, Chandra Shekhar Azad, Mangal Pandey, Ashfaq Ullah Khan and other freedom fighters.

Reiterating the BJP’s often-repeated charge of the SP being a ‘pariwarwadi’ (dynastic) party, BJP president Nadda in Ambedkar Nagar asserted that the Samajwadi Party’s claim of being a new and reformed party was entirely wrong and it is the same party "synonymous with “corruption, injustice, atrocities and misconduct”.