Japan Races To Vaccinate As Virus Surges After Olympics

Japan has managed the COVID-19 pandemic better than many countries, without the kind of restrictive lockdown used in other nations, but some believe that may now be needed. 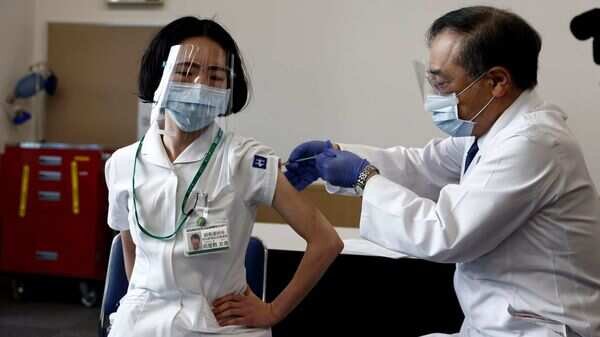 The Tokyo Olympics have ended, but it's still vacation season in Japan, and many people are ignoring government pleas to avoid travel and stay away from bars and restaurants even as the coronavirus spikes at record levels.

Prime Minister Yoshihide Suga is pinning his hopes on vaccinations, which started slow but now are making good progress. How this race between shots and disease finishes may determine Suga's political future, not to mention the health of tens of thousands.

Suga seems optimistic vaccines will win, but with only about 36% of the population fully vaccinated, experts say the virus's highly infectious delta variant is pulling ahead. They are urging the government to put more teeth in its weak state of emergency.

Japan has managed the COVID-19 pandemic better than many countries, without the kind of restrictive lockdown used in other nations, but some believe that may now be needed.

Japan's daily coronavirus cases have topped 10,000 for more than a week, and the total has doubled in the past four months to exceed 1 million. Tokyo's daily caseloads tripled during the Games that ended Sunday. And as hospitals fill up, nearly 18,000 infected people are isolating at home, over 10 times more than a month ago.

Suga has stressed the progress of the vaccine rollout despite its late and slow start.

More than 80 per cent of Japan's elderly population of 36 million have completed their vaccinations since they started getting shots in mid-April. Suga says high inoculation rates among seniors have contributed to a significant decline in the number of elderly patients, serious cases and deaths, relieving strain on the medical system.

“The most effective way to slow the infections and minimize serious symptoms would be to give everyone two shots as soon as possible."

Serious cases are now mostly among people in their 50s or younger, who are still largely unvaccinated. So far, 14 million — less than 20 per cent of those aged 12 to 64 who are eligible for shots — have been fully vaccinated, according to Taro Kono, the minister in charge of vaccinations.

Suga said his goal of fully vaccinating all willing elderly people by the end of July has been mostly achieved.

As he pushes to inoculate younger people, Suga aims to fully vaccinate 40 per cent of all those 12 years and older by the end of August, and to complete shots for all those who wish to do so by October or November.

But vaccines alone might not be enough, experts and officials say.

“With the ongoing surge accelerated by the delta strain, it is extremely difficult to deal with the infections just by promoting the vaccines," Kono told a recent online program. He noted that young adults in their 20s and 30s account for about half of daily cases and urged them to stick to social distancing, mask wearing and handwashing.