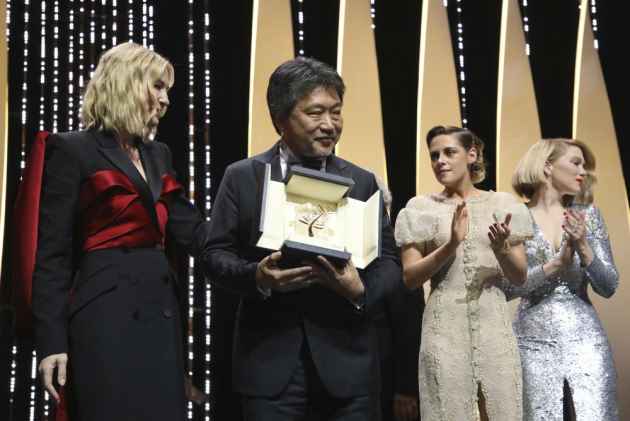 "Shoplifters", a heartwrenching tale by Japanese veteran director Hirokazu Kore-eda about a family of small-time crooks who take in a child they find on the street, won the Palme d'Or top prize at the Cannes film festivaltoday.

Accepting one of global cinema's most coveted honours from jury president Cate Blanchett, Kore-eda said movies made him hopeful for the state of the world.

"Maybe because of the cinema, the people who usually fight each other, the countries that are fighting each other, may be able to come together," he said.

Spike Lee won the runner-up Grand Prix for "BlacKkKlansman", a searing broadside against racism with the stranger-than-fiction true story of an African-American police officer who manages to infiltrate the highest levels of the Ku Klux Klan.

Lebanese actress-director Nadine Labaki, one of three female filmmakers among the 21 contenders, earned the third-place Jury Prize for "Capernaum" set among the poorest of the poor in Beirut and featuring a devastating performance by a 13-year-old Syrian refugee boy.

It was the first edition since the Harvey Weinstein sexual assault scandal rocked the film industry, sparking the #MeToo movement.

Presenting the best actress prize, Italian star Asia Argento, who has said she was raped by the Hollywood mogul at Cannes in 1997, told the ceremony he would never be welcome at the event again.

"This festival was his hunting ground," said Argento, who says she was 21 when Weinstein attacked her in his hotel room.

"He was seated among you... But things have changed. We are not going to allow you to get away it." Kazakhstan's Samal Yeslyamova nabbed best actress for "Ayka" by director Sergey Dvortsevoy for her wrenching portrayal of a young jobless immigrant from post-Soviet Central Asia who abandons her baby in Moscow.

Polish Oscar winner Pawel Pawlikowski took the prize for best director for "Cold War", a tragic love story set against the backdrop of the Iron Curtain.

Pawlikowski, who won the foreign-language movie Oscar for "Ida" in 2015, caused a scandal at home when he told AFP at the festival that the film had been "blacklisted" by the nationalist government. Warsaw denied the claim. He said his award was "a rare piece of good news" for his country.

Marcello Fonte of Italy clinched best actor for his much-loved performance as a soft-spoken pooch groomer who stands up to a local heavy in Matteo Garrone's "Dogman".

"Three Faces" by Iran's Jafar Pahahi, who was barred from attending the festival, shared the best screenplay prize with Italian director Alice Rohrwacher's "Happy as Lazzaro".

The much-praised Belgian transgender drama "Girl" won the Camera d'Or prize for best first film. It had earlier scooped the Queer Palm prize for LGBT-themed cinema and the best actor award for Victor Polster in the Un Certain Regard sidebar section.