Japanese Princess Ayako has married a commoner Kei Moriya in a ceremony at Tokyo's Meiji Shrine. 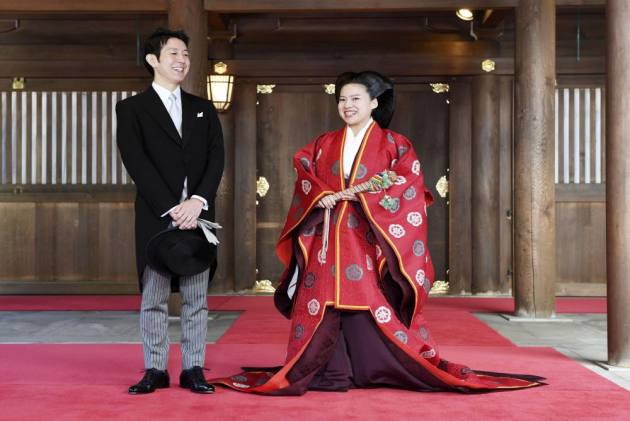 Princess Ayako is the 28-year-old daughter of the emperor's cousin, and the groom, 32-year-old Kei Moriya, works for major shipping company Nippon Yusen.

The couple was shown on national news walking slowly before guests at the shrine on Monday morning.

She wore a Heian-era style hairdo and a traditional robe splashed with red and green patterns while Moriya wore coattails.

Women who marry into the imperial family become members of the family, but those who marry commoners, like Ayako, must leave.

Princess Ayako, the youngest daughter of Emperor Akihito’s late cousin, will receive ¥106.75 million from the state after her expected marriage with commoner Kei Moriya later this month, a government council decided on Thursday, reported JapanTimes.co.jp.

Based on the law on Imperial household finance, the lump sum payment will be provided in order to maintain her high standard of living even after she loses her royal status following her wedding on Monday. The amount equaled the upper limit stipulated in the law, the report said.

Noriko Senge, an older sister of Princess Ayako, received the same amount in 2014 and Sayako Kuroda, the daughter of Emperor Akihito and Empress Michiko, was given around ¥150 million when she married Tokyo Metropolitan Government employee Yoshiki Kuroda in 2005, the report said.

The eldest granddaughter of Emperor Akihito is set to marry a commoner in 2020.

Akihito has said he will abdicate. His eldest son, Crown Prince Naruhito, will ascend to the Chrysanthemum Throne on May 1.