Jayalalithaa Refused To Go To Hospital, Says Sasikala In Affidavit To Probe Panel

Over a year past former Tamil Nadu chief minister's death, mystery still surrounds the timing and circumstances of her death 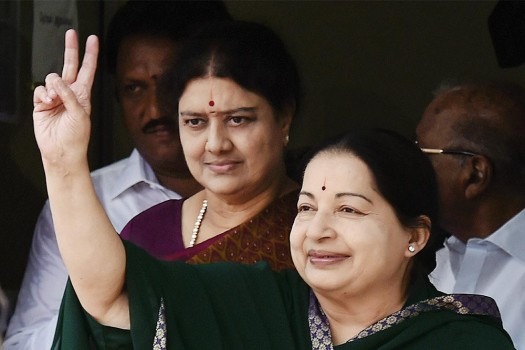 Late Tamil Nadu chief minister J Jayalalithaa had refused to go to hospital before she "fainted" in her bedroom around 10 pm on September 22, 2016, said close aide Sasikala. In a 55-page affidavit submitted to panel probing the death of Jayalalithaa.

Sasikala has declared that Jayalalithaa had regained consciousness in the ambulance and asked where they were taking her, reported The Hindu. Countering the allegations by senior AIADMK leaders O Panneerselvam and M Thambidurai, the affidavit said both the leaders along with Health minister C Vijay Baskar met the hospitalised leader sometime during September 22-27, 2016.

In an affidavit filed before the retired Justice A. Arumughaswamy Commission last week, Sasikala claimed that four videos of Jayalalithaa were also made in the hospital (with her permission) which were produced before the inquiry commission.

Sidelined AIADMK leader Sasikala is serving a four year jail sentence in a corruption case.Sasikala, in the affidavit, claims that Jayalalithaa’s health issues were mainly due to the stress caused by her conviction (and imprisonment) in the disproportionate assets case in September 2014.

Over a year past former Tamil Nadu chief minister's death, mystery still surrounds the timing and circumstances of her death. In Septmenber last year, state's minister for Forests, Dindigul Srinivasan, had sought an apology from the people for ‘lying’ about her health so that people would believe that she was improving. He also claimed that the partymen were afraid of Sasikala and were made to give false assurances to the public.

He had also alleged that no one was allowed to meet the late chief minister. Whoever came, would be briefed by Sasikala's relatives that she was "all right", he said. The fact, he had claimed, was none including himself was allowed to see Jayalalithaa, who was admitted to the Apollo Hospitals in Chennai on September 22, 2016.

After prolonged treatment for infection and other complications, Jayalalithaa had died of a heart attack on December 5, 2016.

Chief Minister K Palaniswami has announced that a commission of inquiry would probe the death.

Present deputy chief minister and former rebel leader O Panneerselvam had pressed for a probe into the death of Jayalalithaa saying there were doubts in the minds of people.