Thapar was one of the first academicians to join the Jawaharlal Nehru University (JNU)when it was founded. 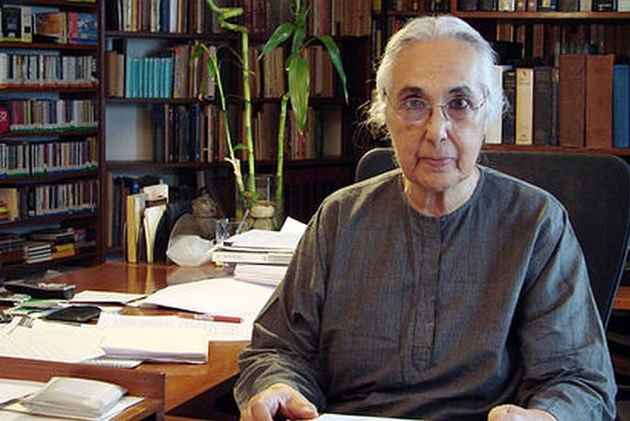 Noted historian Romila Thapar on Saturday alleged that the Jawaharlal Nehru University was being "slowly dismantled" and asserted that critical thinking if trampled upon would destroy the idea of a varsity.

She also said history was facing a threat of "infusion of imaginary theories" which were being used to "ground valid knowledge".

Thapar, one of the first academicians to join the Jawaharlal Nehru University (JNU)when it was founded, said the varsity's first vice-chancellor Gopalaswami Parthasarathi along with many other academicians helped build the institution with "meticulous" care.

"This is being ramped continuously as GP (Parthasarathi) wanted, as the foremost university in India and very often ranked as equal to the better universities in the world. It is now, perhaps not surprisingly, being slowly dismantled," Thapar said at the launch of a book titled 'GP 1912-1995', based on the life of Gopalaswami Parthasarathi -- a journalist, diplomat and academician.

Thapar's comments come in the backdrop of charges by a section of academicians that varsities, including the JNU, were being targeted and the space for critical thinking and dissent was shrinking.

Thapar, 86, noted that university is a place not to just hand out degrees, but to advance knowledge by raising doubts and critically questioning subjects.

"Those in polity have to recognise these rights and nurture them. If they trample on them they will destroy not only that particular institution but the very idea and the function of a university," said Thapar, who along with other the noted academicians had raised concerns over "rising intolerance" in the country after Kannada writer M M Kalburgi was shot dead in 2015.

She said that disallowing the freedom to debate and allowing only authorised ideas was an indication that those in power were "somewhat insecure".