In many ways, and for many people, he left an indelible impression. A grandson remembers his "Thatha" 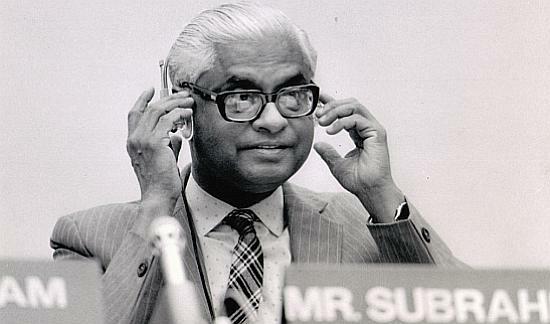 To those who met him—and to thousands who came to know him through his prolific newspaper columns and regular television appearances—K. Subrahmanyam was an extraordinary individual. Growing up in a peripatetic household in provincial Madras (his father was a school teacher and administrator) Subrahmanyam was known as “Ambi” or “Mani” to his family. Later, friends and colleagues in Delhi referred to him as “Subbu” or “KS”. To us grandchildren, he was simply “Thatha”. His earliest contribution to my education was, oddly enough, musical: a Nazia and Zoheb Hassan audio cassette he purchased on a rare visit to Pakistan. For a toddler such as myself, "Dil Bole Boom Boom" had no association with war or conflict. And despite his reputation as a Pakistan hawk, it seems he thought much the same way.

My earliest memory of him was not at a seminar at IISS, a discussion in the India International Centre lounge, or a visit to his former office in Sapru House, as it was for many friends and associates. It was in a basement of our home in suburban Washington one December in the mid-1980s, when he came bearing bounteous gifts for his young grandchildren. "Who needs Santa Claus," I remember thinking, as I observed the tall man with a shock of white hair taking considerable interest in helping me assemble my new toys. "I have my very own". KS brought that same sense of generosity to his professional life, displaying a kindness that was not always discernible to those whose first impressions were often overshadowed by his stern demeanour and intimidating reserves of knowledge. At the Institute of Defence Studies and Analyses (IDSA), which he directed for many years, he supported the efforts of many individuals outside the traditional hierarchy, including young academics with controversial political views and government employees considered too junior to publish articles. Some of them are today household names. A good idea deserved to be heard, KS felt, no matter who came up with it. The same spirit was evident later in his career too: a number of promising young scholars, many of them doctoral candidates, have told me how impressed they were that he would make the effort to attend, and actively participate in, their research presentations. The large number of people who consider him a mentor, and their wide age range, is a telling sign of his remarkable willingness to encourage individuals, regardless of their age or background.

KS was also frustrated by that same sense of rigidity that he sought to overcome. Feeling strongly that younger generations could learn from scholars at IDSA, he attempted to incorporate the institution more closely with Jawaharlal Nehru University. But he was prevented from teaching there on the grounds that he did not have a doctorate, or a higher education in political science or a related field (his highest degree was an M.Sc. in chemistry). He was the first to appreciate the irony that Cambridge—where he was later made a professor—had no such qualms about his academic qualifications.

While he was controversial, and his views often polarizing, KS rarely—if ever—engaged in personal criticism in public discourse, although he was occasionally the object of heated invective. Two years ago, he wrote a pointedly reproachful note to me related to some posts on my blog, where I had mentioned individuals by name whose arguments I disagreed with. Although he couched it in terms that he thought I would find more appealing—that certain people may not be accustomed to personal criticism—his view was that even mentioning individuals in policy discussions risked personalizing debates and eroded a sense of collegiality within the strategic community. That sense of collegiality at a time when criticism and debate have become more personal on blogs,  Twitter and television talk shows was upheld almost to a fault: it explained the sometimes roundabout and passive beginnings to his articles—"It has been said that…”—before he proceeded to systematically demolish a certain viewpoint.

His almost mathematical precision of analysis minus emotion or bias (he was a fan of Sherlock Holmes, and I always felt that the similarities between them were pronounced), was a double-edged sword politically. On the one hand, he was respected across party lines, by Prime Ministers as ideologically diverse as Rajiv Gandhi, I.K. Gujral, Atal Behari Vajpayee and Manmohan Singh. The latter two appointed him to chair key commissions: the National Security Advisory Board, the Kargil Review Committee and the Task Force on Global Strategic Developments. The NDA government even made sure that he was the first person outside of government to be informed of the successful nuclear test in Pokhran. But at the same time, he never developed a close personal relationship with politicians either, former Vice President Krishan Kant being an exception. Despite talk of his influence under Indira Gandhi, he only ever met with her once, in her office for about one hour, despite repeated requests for an appointment and the fact that he was secretary for defence production at the time and Mrs. Gandhi held the defence portfolio in cabinet. And although he was repeatedly recommended for the post of defence secretary, his refusal to seek political patronage ensured that he never held that position, or subsequently that of National Security Advisor that he had done so much to champion.

KS may never have used Twitter and did not have a blog, but for someone who grew up in a household without electricity or a shortwave radio, he took surprisingly well to new forms of media and mass communication. During the Bangladesh war, he made appearances on All India Radio and later featured on television, both on Doordarshan and subsequently on the many cable news channels that sprung up. The move from think tank scholar to newspaper columnist was considered unusual when he made that transition, and the present host of regular columnists on strategic affairs in India have followed a trail that he was among the earliest to blaze. Although he continued to write his columns in long-hand, never being much of a typist, he became a voracious online reader, signing up to a large number of mailing lists, which he followed assiduously. A number of people were surprised when he, an eminence grise now in his late 70s or early 80s, would approach them and  discuss some article they had written in an obscure publication and circulated only on a private listserv. It was also significant that he never employed a secretary as a private citizen, working alone at home on his computer and commissioning a typist when necessary.

But perhaps the most remarkable characteristic that marked KS was his ability to tailor his views to the times, often against prevailing orthodoxy. This was seen most markedly in his calls for an Indian nuclear deterrent but his advocacy of a minimal deterrent once India had achieved a nuclear capability, as well as his defence of a close relationship with the Soviet Union during the Cold War followed by ardent support for the U.S.-India relationship in the post-Cold War era. He understood, earlier than most, the importance of liberal economic reforms for national security, and more recently made impassioned pleas for reforms in Indian governance and political culture.  Again, his understanding of the need for change was reflected in his personal life as much as his professional one.  The product of a traditional household, KS was no rebel. He went to Presidency College in Madras, took the civil services exam and joined the Indian Administrative Service, becoming a family breadwinner at an early age while staying near his aging parents.  But although he remained an avowed vegetarian and could quote at length from Hindu religious texts, he was also an atheist. When many of his generation remained wedded to orthodox traditions such as arranged marriage and urging their children to pursue educational and professional opportunities in traditional fields such as engineering and business, his views on these subjects was extraordinarily liberal. He found it a source of pride, rather than embarrassment, that his children and grandchildren were civil servants, diplomats, economists, historians, architects, filmmakers and lawyers married to people who were American, French, Dutch and Japanese. He saw no contradiction between nationalism and internationalism.

But while there are many lessons one can draw from his life and work, one of my colleagues may have articulated the most important one (on Twitter, where else?):  “The best tribute to K Subrahmanyam would be to not fossilise his thoughts or propagate his views as a dogma. We Indians are masters at both.” KS would  have been the first to agree.

Dhruva Jaishankar is Program Officer for Asia at the German Marshall Fund in Washington DC. A version of this originally appeared on http://polaris. nationalinterest.in.

The Sounds Of Silence