'Nathji should take the moral responsibility for the defeat as he is chief minister and most importantly the state party chief as well', a Congress leader said. 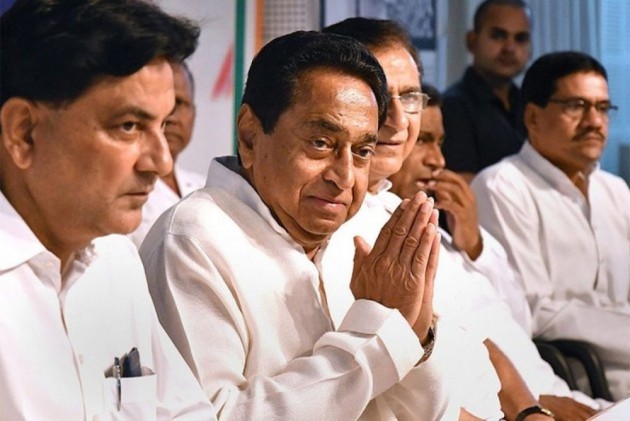 After the Congress's poor showing in the Lok Sabha polls in Madhya Pradesh, murmurs of protest have started against Chief Minister Kamal Nath, who took charge just six months ago, in the ruling party.

On the other hand, buoyed by its speculator performance in the state, the BJP is seeking to put pressure on the Congress government, which has a wafer-thin majority in the 230-member assembly and also sought Nath's resignation.

Till late night, the BJP had won 26 of the 29 Lok Sabha seats and was leading in two others. The Congress has won the only seat - Chhindwara - till now.

The saffron party has already petitioned Governor Anandiben Patel, requesting her to convene a special session of the Assembly to test the Congress's legislative strength.

Besides being the Chief Minister, Nath is also the state Congress president.

"Nathji should take the moral responsibility for the defeat as he is chief minister and most importantly the state party chief as well, a Congress leader said.

"He remained too busy in Chhindwara to ensure his son Nakuls victory from there and left other candidates to fend for themselves in Lok Sabha elections, he added.

"Congress leaders have to wait for days to meet him, he said.

"He should resign from either post (the CM or state Congress president), he opined.

Singh was averse to fight elections from Bhopal and was keen to contest from Rajgarh, his home district, but Nath prevailed over the central leadership, Congress insiders said.

Besides, the BJP has stepped up efforts to put pressure on the Nath government.

Leader of Opposition Gopal Bhargava of the BJP Monday wrote a letter the Governor, requesting her to convene a special session of the Assembly to test the Congress's legislative strength on the floor of the House.

The Nath government is backed by two BSP MLAs, one legislator of SP and four Independent lawmakers.

The BJP, which ruled the state since 2003 before being ousted from power, bagged 109 seats.

"Nath should resign, not on the moral ground but due to the overwhelming people's mandate in favour of the BJP in the state," state BJP president Rakesh Singh said.

"Neither the Congress won the assembly polls last year, nor we lost it," said the BJP leader, referring to the close contest between the two parties.

The BJP won half a per cent more vote share than the Congress, but failed to bag enough seats to retain power in the state.

Nath Wednesday had claimed 10 of his MLAs have told him that they were receiving phone calls and being offered money and posts to switch sides.

However, he had expressed complete faith in his party's MLAs.

His statement came after the BJP said the Congress-led government in Madhya Pradesh was in a minority.