A new book on half-a-century-old volatile history of north Kerala explores the reasons, motivations and the local lore of 'India's bloodiest revenge politics'. 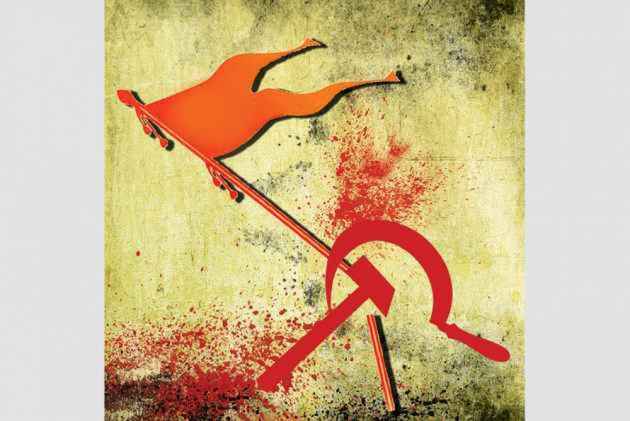 No employee shall be required or allowed to work in any industrial premises for more than nine hours on any day or for more than forty-eight hours in any week; provided that any adult employee may be allowed to work in such industrial premises for any period in excess of the limit fixed under this section subject to the payment of overtime wages if the period of work, including overtime work, does not exceed ten hours on any day and in the aggregate fiftyfour hours in any week; where any employee employed in any industrial premises is required to work overtime, he shall be entitled in respect of such overtime work, to wages at the rate of twice his ordinary rate of wages.

The EMS government implemented such provisions in September 1968, attracting criticism from beedi barons, especially those in North Malabar. They argued that these measures to bring beedi workers under the factory laws were unrealistic, a position shared by the RSS which reportedly had strong financial links with Mangalore Ganesh Beedi,17 which decided to shut shop in Kerala on 15 October 1968. That meant 12,000 workers lost their jobs. The company also warned that unless the workers’ unions relinquished their claims, it wouldn’t run its operations in the state.

But then the company knew only too well that quality beedis could be made only by those highly skilled workers from Kerala. So, its Karnataka-based proprietors, with solid RSS links, decided to enter Kerala through what began to be known as ‘kangani pani’, a derogatory expression for a system whereby the company would deliver raw materials to homes of select workers, but not offer them any place to work. To keep the new laws at bay, it also managed to hire as manager a seasoned RSS man, an amiable former Indian railways employee Chandrasekharan, popularly known as Chandrettan. He left his earlier job to take charge of one of the three new companies that Mangalore Ganesh Beedi had floated in the state to beat the new guidelines—Mahalaxmi Traders. The other two were Guru Kripa and Deepak Tobacco. Their depots were opened to collect the beedis rolled by the workers from their homes. Most of those who found employment through the new route were RSS sympathizers— because the very reason why the RSS had cooperated with the Mangalore-based beedi tycoon was to rehabilitate them, says P. Narayanan, a former editor of Kesari newspaper and a seasoned RSS leader. According to him, the beedi units had become a nursery of sorts for recruiting members to the CPI(M), and were also routinely hosting party classes. The new system suited the RSS agenda very well.

The Marxists thought this was an anti-worker step by outstation beedi barons to circumvent state rules and float new companies with an eye merely on profit. It infuriated them that the company owners didn’t value the highly skilled beedi workers of Kannur, who were the backbone of the industry. Such indifference to the welfare of the workers had to be resisted at all cost, they decided. They also resented that the RSS was working as a private army for Mangalore-based tycoons.

The stage was set for a major conflict. 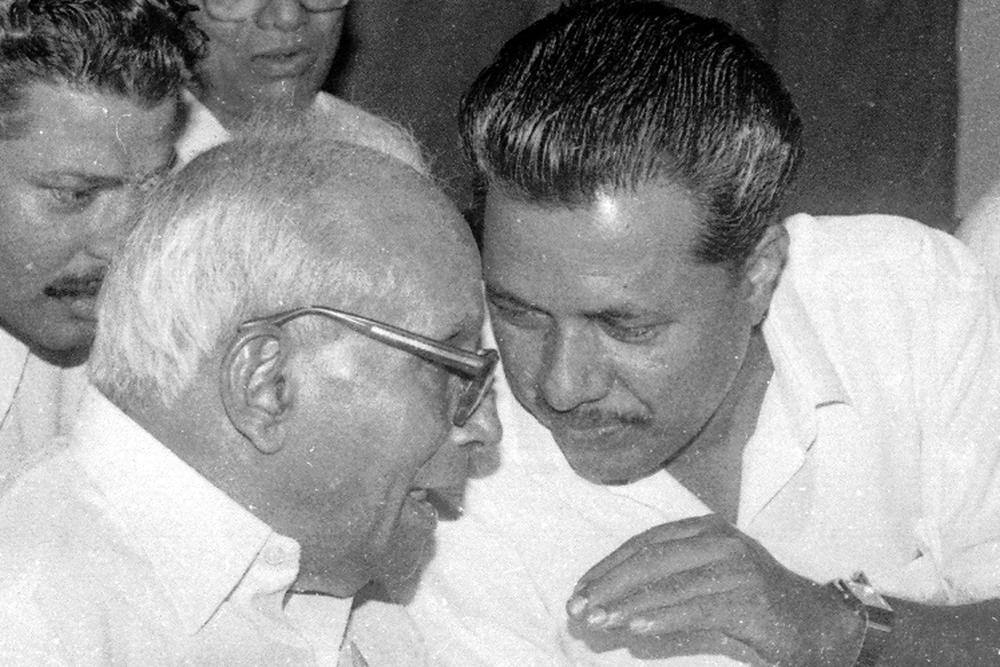 The CPI(M) leaders began to look for a solution. It occurred to them that a cooperative had to be set up to house the beedi workers who had lost their jobs. The idea of launching Kerala Dinesh Beedi was born. The plan would come to fruition only in 1969, and until then, the beedi workers were on strike. This phase was destined to trigger major confrontation in the district between pro-CPI(M) workers and the RSS, which was unabashedly in favour of Mangalore Ganesh Beedi and its three subsidiaries in the state.

In response to the demand for reopening the shut-down units, the company, through its chief negotiator, argued that ‘there had not been any conciliation talks’, because, according to him, conciliation talks are held when there is a labour dispute. According to Mathrubhumi newspaper (7 November 1968 and 23 November 1968), which reported the incident, the negotiator said that the employee–employer relationship had ceased to exist between the management of Mangalore Ganesh Beedi and its workers. The negotiator wanted all the trade unions (including the RSS-steered Bharatiya Mazdoor Sangh, or BMS) to accept the ‘outwork system’ where payments were low. He also wanted the state government not to insist on past labour liabilities.

As Thomas Isaac and co-authors18 point out in their book on Kerala Dinesh Beedi, the employers’ demands were a virtual declaration of war against the state government and the beedi unions. Such an outrageous position that sought a free hand to break the law meant confrontations were about to heighten further. The RSS squads had no qualms about offering protection to the managers of Mahalaxmi Traders at its depots in the wake of the strike becoming violent. Their justification was that the state was becoming increasingly anti-business under communist rule.

It was during this time that R. Raghavan, the Thalassery unit secretary of the CPI(M), was reportedly stopped on his way home one late evening and warned to stay off the RSS’s path. Various other CPI(M) workers were routinely harassed near Chettipeedika either while they were passing by or when they went to watch movies at Mukund Talkies. In hindsight, Pinarayi Vijayan feels that the RSS sensed an opportunity to browbeat the Left in Kerala over labour issues due to what was happening in India’s commercial capital, Bombay (now Mumbai).

During this time, the rise of the provincial Shiv Sena, a right-wing political entity floated in the name of the Maratha hero Chhatrapati Shivaji, had been rapid, catapulting its leader Bal Thackeray to the national limelight. Its postures struck a chord with the locals in Bombay whose frustrations at being unemployed and underemployed were displaced by Thackeray through rabble-rousing and delivering sectarian speeches which pointed at their enemy number one: the southerner. These divisive sentiments whipped up by the Shiv Sena would shortly decimate the communists and the leftist trade unions in the city touted as India’s commercial capital.

Author and senior journalist Sujata Anandan uncovered the conspiracies that took place behind the scenes in Bombay. ‘By [Bombay-based businessman and architect] Madhav Deshpande’s own admission, Congress leaders then sent him bags of cash to take care of meetings that the [Shiv] Sena might hold or to put up candidates against those of the communist parties to cut into their vote bank by raising the regional sentiment against that of workers’ unity. That’s how they defeated former Union defence minister V.K.  Krishna Menon who had contested from Bombay North with communist support after he was denied a ticket by the Congress on account of his role in India’s debacle in the 1962 war with China.’19 Historian Juned M. Shaikh also captured in his essays the outcome of the reported Congress strategy to prop up the Shiv Sena as a counterweight to the communists and the Left trade unions in Mumbai and the rest of Maharashtra. In his article titled ‘Worker Politics, Trade Unions and the Shiv Sena’s Rise in Central Bombay’,20 he wrote: ‘In the mill districts of Central Bombay, there was a keen tussle for political supremacy between the leftist trade unions and a right-wing party called the Shiv Sena. The Shiv Sena’s right-wing image can be culled from a few repetitive themes in its mouthpiece, the weekly Marmik. Some of these themes were anti-communism, Maharashtrian pride, Indian nationalism, and Hindu identity.’ He analysed how the new entity in the late 1960s made a deep impact among the middle classes and the working-class population of the city. It also won the municipal elections. Shaikh added, ‘The Shiv Sena’s electoral gains in Central Bombay were at the expense of the Left parties and the Congress. Similarly, the trade union wing of the Shiv Sena made a dent in the support base of the entrenched unions of the Left and the Congress parties in various industries of the city, including the textile mills of central Bombay.’

‘That must have been an inspiration to the RSS to take on the Left in Kannur over a trade-union issue,’ asserts Vijayan. The RSS, which is intimately linked with Maharashtra politics and its dynamics, apparently felt that drumming up pro-Hindu sentiments in a thickly Muslim-populated region such as Thalassery might help improve its fortunes in Kerala in the long run. Thalassery, home to affluent Muslims and a large chunk of marginalized and impoverished Hindus, was seen as the ideal turf to spark off a religious conflict. Here, there has been a long-standing rivalry between the moneyed classes that goes back several decades.

As the political crisis in Thalassery worsened, with clashes becoming frequent, C.H. Kanaran, the then state secretary of the CPI(M), came visiting. Kanaran, hands-on and assiduous at pointing out tactical faults of the party, said at a party meet that Vijayan should take over as the new unit secretary. ‘I said no because I was very young,’ Vijayan tells me. But Kanaran was not someone who would take no for an answer. And Vijayan had to relent.

In his new position, Vijayan was determined to fight against the frequent harassment of party cadres. He says RSS leaders led by one Sreedharan and his brothers in the Kolasseri region of Thalassery made life hell for his partymen, especially the hapless beedi workers. ‘In Chettipeedika, the situation was much worse,’ he says, emphasizing that his name was dragged into the case as part of a conspiracy to target the new leadership. ‘In the case involving Ramakrishnan’s murder, I wasn’t remanded even for an hour in any police station, because the court was absolutely convinced that I was not part of it,’ Vijayan avers. And as luck would have it, Ramakrishnan’s death would result in immediate cessation of hostilities between the CPI(M) and the RSS.

But that was the calm before the storm.