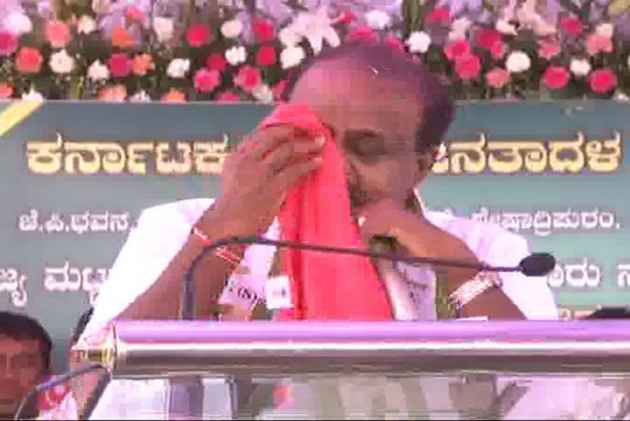 Karnataka chief minister HD Kumaraswamy on Saturday said he is not happy while heading a coalition government and is swallowing the pain of it.

“You are standing with bouquets to wish me, as one of your brothers became chief minister and you all are happy, but I'm not. I know the pain of coalition government. I became Vishkanth and swallowed pain of this government,” emotional Kumaraswamy said at an event in Bengaluru on Saturday.

#WATCH: Karnataka CM HD Kumaraswamy breaks down at an event in Bengaluru; says 'You are standing with bouquets to wish me, as one of your brother became CM & you all are happy, but I'm not. I know the pain of coalition govt. I became Vishkanth&swallowed pain of this govt' (14.07) pic.twitter.com/cQ8f90KkFT

Kumaraswamy further said that he wanted to become the chief minister of Karnataka to solve the problems of the people and fulfill the unfinished agenda of his father and former state chief minister HD Deve Gowda.

“But people of the state didn't take to confidence to solve all the problems,” he added.
After days of high-political drama in the state, the Congress and the Janata Dal (Secular) had come together and managed to form the government in the state in partnership.