Karnataka Polls: Caste Polarisation May Have Forced Siddaramaiah To Contest From Two Seats

According to some accounts, internal Congress surveys indicated a tough battle for the chief minister in Chamundeshwari. 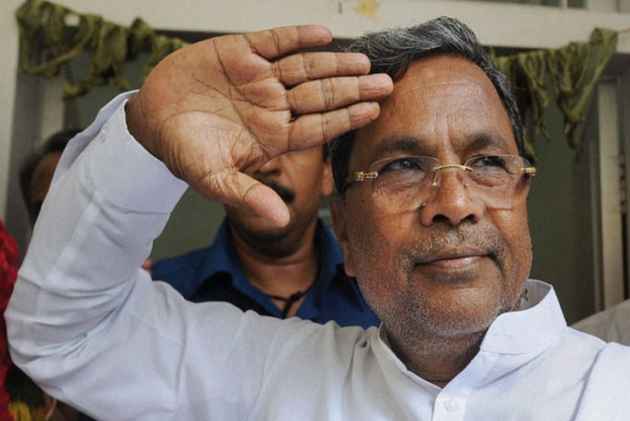 The polarisation of upper castes, especially the numerically strong Vokkaligas, in Chamundeshwari seat might have prompted Karnataka Chief Minister Siddaramaiah to play it safe and also contest from Badami, watchers of the Assembly polls said on Tuesday.

Siddramaiah, who has repeatedly asserted that the Congress will score a second straight win in one of its remaining strongholds, had initially said he would contest only from Chamundeshwari, a constituency that gave him "political birth".

The chief minister also often said this was "most likely" going to be his last election and wanted to end his political innings from where it started.

According to some accounts, internal Congress surveys indicated a tough battle for the chief minister in Chamundeshwari.

Poll watchers maintain there was an "undercurrent" against Siddaramaiah in the influential Vokkaliga community to which another major contender for power--the JD(S) of former prime minister H D Deve Gowda-- belongs.

Narayana A, who teaches political philosophy and Indian politics at Azim Premji University, said, caste polarisation might have left Siddaramaiah worried and forced him to also opt for Badami, which has sizeable presence of his fellow Kuruba voters.

"Otherwise, in an election where he has to lead from the front, virtually travelling across the state, he shouldn't be wasting his time contesting from two constituencies," he said.

The perception is Chamundeshwari seat is difficult for him. "Not that he will lose, it will be difficult," he added.

Narayana said there appeared to exist "some kind of Vokkaliga anger" against him, what was "palpable" in some places and "subdued" in another.

"There is some kind of undercurrent and people there seem to be talking about it....Maybe because of this factor also he had to play it safe. Otherwise I don't see why he had to contest from two constituencies," he added.

Political observers say Siddaramaiah hoped to mobilise a large section of the Lingayat voters in the Congress' favour by recommending religious minority status for them. However, differences have surfaced in the Lingayat and its sub-group Lingayat Veerashaivas over the issue and the party cannot be completely sure of their united support.

Besides, the BJP's chief ministerial contender B S Yeddyurappa belongs to the Lingayat community, which has been the bedrock of the saffron party's support base for quite some time. The Lingayats are the second largest caste after Vokkaligas.

In the current scenario, AHINDA (Kannada acronym for minorities, backward classes and Dalits) are seen as the only voter base still seen as largely loyal to the Congress and Siddaramaiah in the constituency.

However, some observers, seeking not to be named, said a section of AHINDA too felt alienated because of the dominance of Kuruba community in the region under the Siddaramaiah government.

Siddaramaiah had last contested from Chamundeshwari in 2006 in a by-poll on Congress ticket and won by a wafer thin margin of 257 votes against JD(S) candidate in a cliffhanger of a contest. Siddaramaiah had then avenged his expulsion from the JD(S).

Siddaramaiah had made his debut in the Assembly from Chamundeshwari in 1983 on a Lok Dal ticket. Since then he won the seat five times and lost twice.

He currently represents Varuna in Mysuru after it became a constituency in 2008 following delimitation. The seat has now been allotted to his son Yatindra.

In a tacit acknowledgement that he has a tough battle ahead in Chamundeshwari, the chorus by Siddaramaiah's supporters that he contest from north Karnataka, particularly Badami, grew.

Siddaramaiah, who had already filed his nomination for Chamundeshwari, also said local party leaders in Bagalkote and Vijayapura districts wanted him to contest from Badami.

People in Congress circles say Siddaramaiah jumped the gun by declaring he would contest from Chamundeshwari even before the elections were announced without ascertaining the ground reality.

Siddaramaiah has claimed there was a tacit understanding between the BJP, which is making a strong bid to wrest the state from the Congress, and the JD(S), in both Chamundeshwari and Varuna.

The BJP, he said, put up a relatively weak candidate in Chamundeshwari, which has a strong Vokkaliga presence, to help the JD(S) nominee. The JD(S) reciprocated in a similar way in Varuna from where Siddaramaiah's son is in the fray. Siddaramaiah, however, asserted candidates of both the parties would be defeated.

The battle for Badami, where the BJP has fielded its Lok Sabha member B Sriramulu, a prominent ST leader considered close to the influential Reddy brothers of Ballari, may also not be a cakewalk for Siddaramaiah.