Karnataka Unveils State Flag, Becomes Only State After J&K To Have One 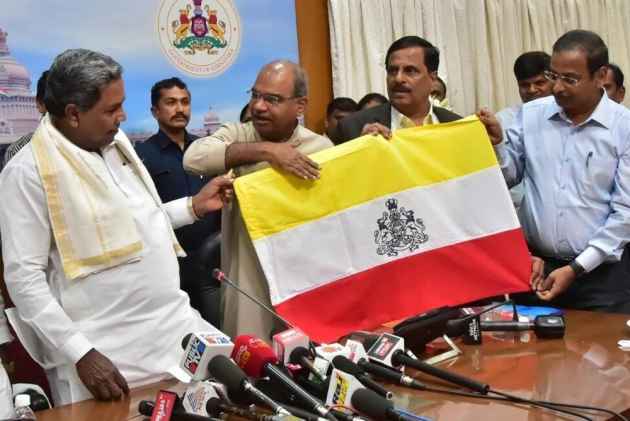 The Siddaramaiah government in Karnataka today unveiled a state flag.

The tri-colour flag in red, white and yellow has state emblem of a two-headed mythical bird called “Ganda Bherunda” in the middle.

This has made Karnataka the only state after Jammu and Kashmir, which has a special status, to have a state flag.

According to reports, the committee to decide the design of the flag headed by eminent Kannada writer and scholar Hampa Nagarajaiah submitted the new design to Chief Minister Siddaramaiah at the Vidhana Soudha today morning.

The Chief Minister then approved the design and assured the government will send it to the Centre.

The unveiling of the flag is seen as part of the recent Kannada identity assertions in Karnataka. The state had recently witnessed huge protests over Hindi imposition by the Centre. Chief Minister Siddaramaiah had ordered removal of Hindi signage from Bengaluru Metro in last July. He had also taken several measures to uphold the primacy of Kannada in Karnataka.

The Opposition BJP had earlier disapproved of the idea of a separate flag for the state but later diluted its stand after uproar by the public. The union home ministry had also expressed its disapproval. However, unveiling of flag is seen as a significant political step for the ruling Congress in the poll-bound state.

In an article in Outlook, columnist Aakar Patel had argued that this flag has acceptance in all political parties and it is not offensive to anyone. “Unlike the saffron flag, the Karnataka flag does not stand for one religion. There is absolutely no problem with the state using this as a symbol of the rich and proud heritage of Karnataka,” he had said.

According to a report by BBC, the state has had an unofficial "Kannada flag" since the 1960s - the red-and-yellow flag is popular with the local people and many Kannada activists also wear it as a scarf. It is not used during national ceremonies like Republic Day or Independence Day, but people hoist it across the state on 1 November every year to mark the day the state was formed. For years, there has been a demand to recognise it as the state's official flag, the report said.

After unveiling the flag, Siddaramaiah said, “Kannada flag is not unconstitutional. It is not barred by the Constitution. The only thing is we have to hoist it below the national flag, which we will anyway do. We will send the design to the Centre. Hope they approve it. There has been a long pending demand for it. I am happy that we finally have a Kannada Baavuta (Kannada Flag),” as quoted by News 18..