The DMK chief was previously admitted in the Kauvery Hospital in December 2016 after he complained of breathing difficulties. 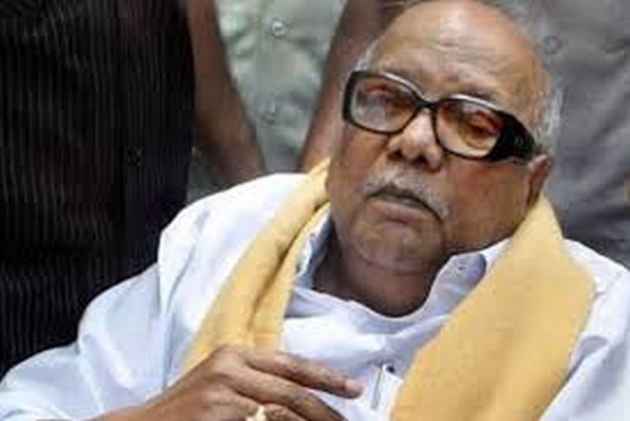 The condition of ailing DMK patriarch M Karunanidhi has "declined" and keeping his vital
organs functioning remains a "challenge", Kauvery Hospital said on Monday, indicating the next 24 hours could be crucial.

"There has been a decline in the medical condition of DMK president and former Chief Minister M Karunanidhi. Maintaining his vital organ functions continues to remain a challenge considering his age related ailments," it said.

The DMK patriarch is on "continuous monitoring and being treated with active medical support. His response to the medical interventions over the next 24 hours will determine
the prognosis," executive director of the hospital Dr Aravindan Selvaraj said in the release.

As the latest set back was announced, a large number of DMK volunteers thronged the hospital premises. Karunanidhi was admitted to the intensive care unit of the hospital on July 28 following a dip in his blood pressure, which stabilised after medical intervention.

The hospital, however, had on July 31 said an extended period of hospitalisation will be necessary due to age related overall decline in his general health, altered liver function
and haematological parameters.
Since then he continues to be monitored by a team of specialists. A host of dignitaries and leaders, including President Ram Nath Kovind Vice-President Venkaiah Naidu and Congress
President Rahul Gandhi, had visited the hospital and enquired
about the veteran's health.

For the first time since his hospitalisation, the DMK patriarch's wife Dayalu Ammal visited him earlier in the day on Monday.

Wheel-chair bound, she arrived in a vehicle usually used by Karunanidhi. For quite sometime, she is not keeping well due to age related issues. Tamil Nadu Congress Committee chief Su Thirunavukkarasar too visted the hospital and after meeting the DMK president's
family members told reporters that there was a "slight decline in his health this morning."

Several high-profile politicians, including Congress president Rahul Gandhi, Kerala chief minister Pinarayi Vijayan, and actor-politician Rajinikanth among others, have visited the five-time chief minister of Tamil Nadu at the hospital.

Selvaraj, in an official statement on July 31, said that an extended period of hospitalisation would be necessary due to age-related overall decline in Karunanidhi's general health, altered liver functions and haematological parameters.

The DMK chief was previously admitted in the Kauvery Hospital in December 2016 after he complained of breathing difficulties. He had undergone a tracheostomy, the procedure to enable supply of more oxygen into the lungs.