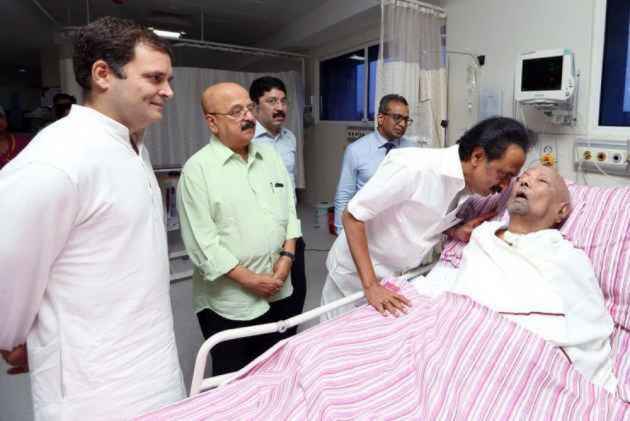 The hospital on Monday said the condition of ailing DMK patriarch M Karunanidhi has "declined" and keeping his vital organs functioning remains a "challenge", indicating that the next 24 hours will be crucial.

The 94-year-old five-time Tamil Nadu chief minister was being continuously monitored and treated with active medical support, a press release issued by the hospital said.

Later on Monday, Union Minister Nitin Gadkari  visited the hospital and enquired about the health of  the DMK chief.

Gadkari was received by former Union Minister A Raja, after which he met Karunanidhi' son and DMK working president M K Stalin and other family members.

Police, meanwhile, increased the deployment of its personnel here as the whole of Eldams Road junction at the upscale Alwarpet area here teemed with DMK cadres.

Karunanidhi was admitted to the intensive care unit of the hospital on July 28 following a dip in blood pressure, which stabilised following medical intervention.

The hospital had, however, said on July 31 that an extended stay could be necessary due to age-related overall decline in his general health, altered liver function and haematological parameters.

A host of dignitaries and political leaders, including President Ram Nath Kovind Vice President Venkaiah Naidu and Congress chief Rahul Gandhi have visited the hospital over the last few days to inquire about the condition of the DMK veteran.