While higher reaches of the valley have been witnessing intermittent snowfall since Monday, Srinagar -- the summer capital of Jammu and Kashmir – received the first snowfall of the year, they said. 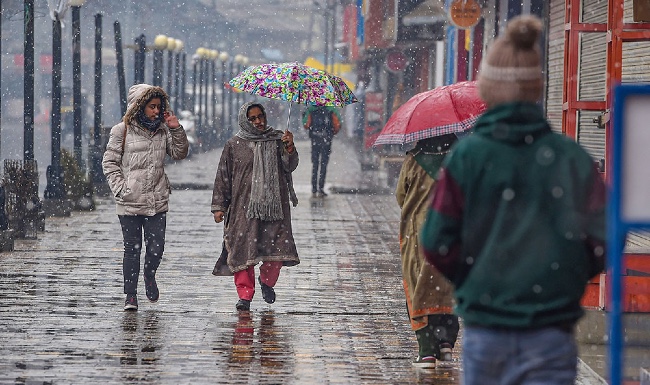 Kashmir received fresh snowfall on Tuesday, forcing suspension of air traffic to the valley as authorities carried out snow-clearance operations in all major towns, officials said.

The snowfall and low visibility hit air travel to and fro Kashmir, according to officials. "So far, 16 flights have been cancelled. If the weather improves, the air traffic might be restored later in the day," an official of the Airport Authority of India told PTI. Authorities have started snow clearance operations in all major towns, including tourist resorts of Gulmarg and Pahalgam, they said.

The mercury in Kupwara in north Kashmir settled at a low of 0.2 degrees Celsius. The Met office has forecast widespread snow/rain spell of moderate to heavy intensity till January 8. Heavy snow is expected at some places during the period as well, it said.

Kashmir valley is currently under the grip of the 40-day harshest winter period known as 'Chilla-i-Kalan' which began on December 21. 'Chilla-i-Kalan' is a period when a cold wave grips the region and the temperature drops considerably leading to the freezing of water bodies, including the famous Dal Lake here as well as the water supply lines in several parts of the valley.

The chances of snowfall are the most frequent and maximum during this period and most areas, especially in the higher reaches, receive heavy to very heavy snowfall. The 'Chilla-i-Kalan' will end on January 31, but the cold wave continues even after that in Kashmir with a 20-day-long 'Chillai-Khurd' (small cold) and a 10-day-long 'Chilla-i-Bachha' (baby cold).