Local residents of Kangan alleged that the youth was hit by a bullet fired by the forces at Kangan during the clashes. 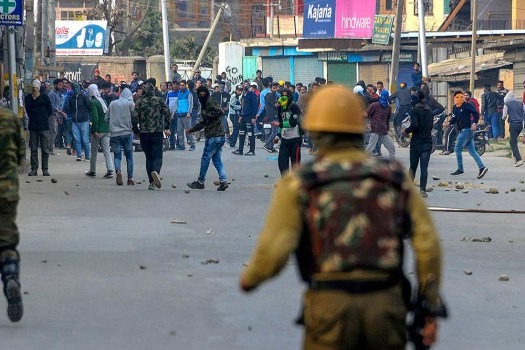 A 22-year-old, Gowhar Ahmad Rather, who was wounded after receiving fire arm injuries on Monday at Kangan, succumbed today at the Sheri Kashmir Institute of Medical Sciences (SKIMS) here, the Medical Superintendent of the hospital told Outlook. Gowhar had sustained firearm injuries in Kangan area, around 40 km northwest of Srinagar.

The Medical Superintendent said the cause of his death was firearm injury to his head. With his death, five civilian have been killed since Sunday morning when in three separate encounters, the police and the army killed 13 militants in South Kashmir.

The police had earlier claimed that Gowhar was injured “after falling down when the forces were chasing protestors.” But his family members said that he was "targeted from close range and shot in the head with bullet". Local residents of Kangan alleged that the youth was hit by a bullet fired by the forces at Kangan during the clashes.

On Monday evening the police spokesperson said a group of “miscreants had gathered in Kangan market to pelt stones and disturb law and order in the area.” “A police party reached the spot. On seeing, the miscreants started running during the course of which a boy Gowhar Ahmad Rather fell down and injured his head on the edge of the drain,” the police spokesperson had said. He said the injured person was taken to Trauma Hospital Kangan where from he was referred to SKIMS Soura. “Reports regarding bullet injury are completely false since no bullet was fired on the spot,” the spokesperson had claimed.

A senior police official told Outlook that the police have initiated an internal inquiry into the incident.