The dipping temperature has also raised concern as it leads to the freezing of water bodies and water supply lines in several parts of the valley. Contrary to the prediction of the Meteorological (MeT) Department, residents in Srinagar and other parts of the valley woke up on Sunday morning to a beautiful view of snow spread all around. Snowfall began late on Saturday night in most parts of Jammu and Kashmir. “As of now snowfall is likely to decrease gradually and there will be a temporary break till evening,” the MeT says.

On Saturday evening, MeT had predicted a two-day wet spell from Monday onwards and the possibility of moderate snowfall in plains across the Valley and heavy snowfall in higher reaches and parts of south Kashmir.

The Valley is witnessing the 40-day period of harshest winter which is locally called Chillai Kalan. During Chillai Kalan, the coldest period of winter, which is observed between December 21 and January 31, temperature drops considerably and the chances of snowfall are most during this period, particularly in the higher reaches.

The dipping temperature has also raised concern as it leads to the freezing of water bodies, including the Dal Lake in Srinagar, and the water supply lines in several parts of the valley. 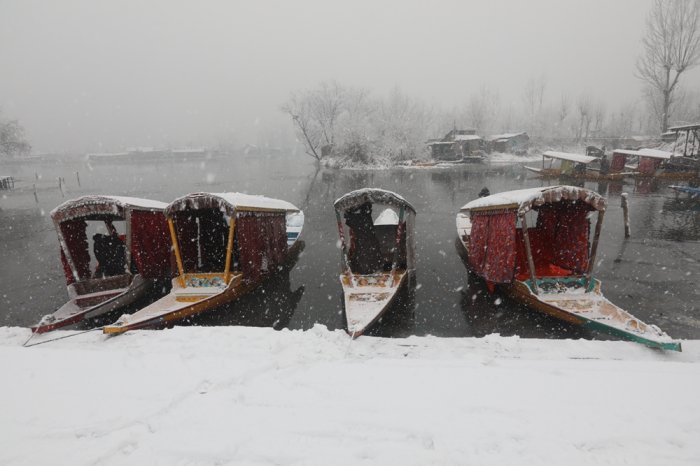 Boats lined up in a freezing lake. Credits: Asif Umar

According to the officials, the heavy snowfall at the Jawahar Tunnel has already led to the closure of the Srinagar-Jammu highway.

The MeT forecast says from January 4 to January 5, snowfall would be widespread with chances of heavy snow across the region particularly over Pir Panchal range, Chenab valley, and various districts of south Kashmir. “This may lead to a disruption of surface and air transportation and waterlogging,” the MeT said. 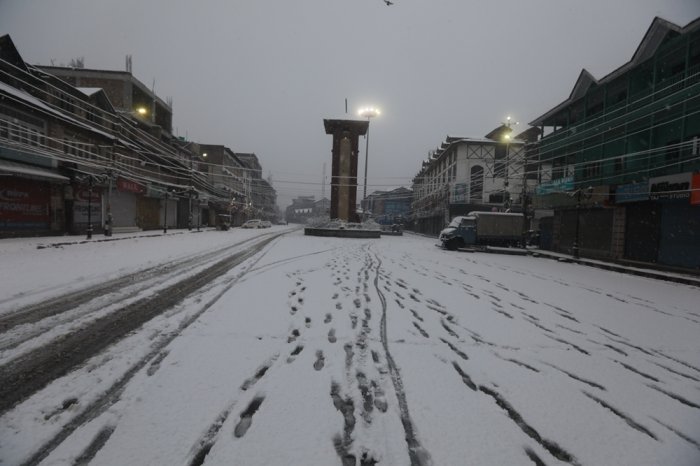 A view of the Lal Chowk in Srinagar. Credits: Asif Umar

Due to freezing temperature and extremely slippery road conditions, authorities on Thursday had already announced that Leh-Srinagar highway will remain closed till further orders. Water bodies including the Dal Lake have been freezing due to the sub-zero temperature.

The government said water supply to the city of Srinagar has not faced disruption. However, in south Kashmir’s Anantnag district disruption of water supply due to snowfall was reported.

Meanwhile, Disaster Management Authority has issued a low-level avalanche warning (yellow alert) for upper reaches of Ramban district. The MeT department has issued an orange alert which means people have been asked to maintain vigil in Jammu & Kashmir and Ladakh.