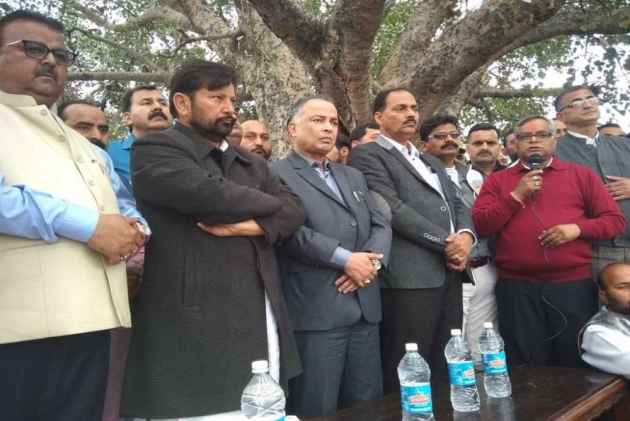 BJP leader Choudhary Lal Singh on Saturday defended his participation in a rally supporting the accused in the Kathua rape and killing case, saying that it was meant to defuse the situation and restore normalcy.

Singh and Chander Prakash Ganga, BJP ministers in the Jammu and Kashmir coalition government, on Friday tendered their resignations after facing criticism for their participation in the event.

The issue would be decided in the Legislative Party meeting on Saturday.

"We had gone to defuse the situation created due to migration one and half months back. We told them they should go back. Abdul Gani Kohli (minister) was sent to the house of the victim, so that an ugly situation was not created," Lal told reporters.

"I had gone there, (ministers) Bali (Bhagat) and (Abdul Gani) Kohli had gone to Nowshera and Sunderbani to listen to people. Should we not listen to them? For what are we people's representatives? Should we allow people to burn the state and die," he asked. The rally was organised by Hindu Ekta Manch in favour of the men accused of raping and killing an eight-year-old girl from the Bakerwal community.

The residents of Rasana village had also migrated to Hiranagar as a protest and blocked a road against the PDP-BJP government alleging harassment.

Lal said their primary responsibility was to maintain peace and communal harmony in the state.

"Is it fine that state keeps on burning and the people become violent... I do not believe in Hindu-Muslim politics. Everybody is equal for me," Lal said.

He said they had gone to Rasana as they had a responsibility to reach out to the people.

"Migration had taken place. Our party leadership, the party president, sent us there with responsibility. They did the right thing. We sat with over 5,000 people and made them understand. They heard us and went back to their homes," he said.

He said that people were told that an inquiry would be held and they wouldn't be harassed.

He claimed that the people in Kathua suspected that the inquiry would not be impartial and demanded a CBI probe.

"We put forth their demand before the party as well as chief minister Mehbooba Mufti, who rejected it and said the Crime Branch would probe the matter," he said.

"The people told us that one probe panel was replaced by another and then by a third one. I want there to be peace and normalcy in the area. Those responsible should be punished but a wrong person should not be blamed," he said.

The body of the girl was found in Rasana forest on January 17, a week after she went missing while grazing horses in the forest area.

On January 23, the government had handed over the case to the Crime Branch which formed a special investigation team and arrested eight people, including two Special Police Officers (SPOs) and a head constable.

Lawyers also opposed the action, alleging that minority Dogras were being targeted.

"The way some media persons created a certain perception in the country is wrong. We had gone to defuse the situation created due to migration," he said.