Despite having actors like Naseeruddin Shah, Raghubir Yadav, Lara Dutta, Soha Ali Khan, Kritika Kamra, and many others, ‘Kaun Banegi Shikharwati’ is squandered all over. Here’s the full review. 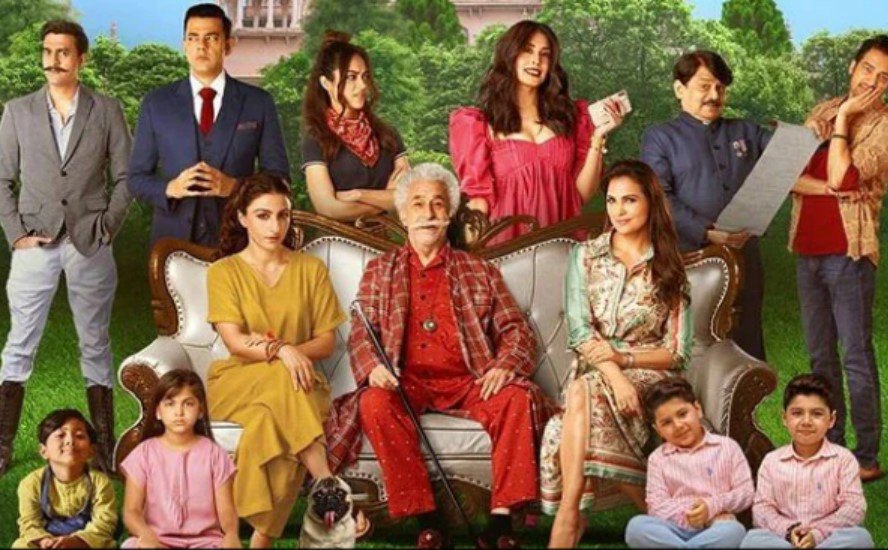 The film ‘Kaun Banegi Shikharwati’ is set in Rajasthan and tells the story of Raja Mrityunjay (Naseeruddin Shah), who is broke and owes the Indian government a hefty amount in the form of unpaid property taxes. To get out of this scenario, he fakes up sickness and summons his four estranged daughters, Devyani (Lara Dutta), Gayatri (Soha Ali Khan), Kamini (Kritika Kamra), and Uma (Anya Singh). He plans to hold a tournament amongst them in which there will be nine rounds, each with a job for the princesses to complete. At the end of the tournament, the winner will be crowned King. Will the daughters be able to resolve their issues amidst themselves? Will the father be able to get back his estranged daughters? Will the kingdom survive? Will the king be able to pay up the government taxes? Well, you’ll have to watch the show for that.

Raghubir Yadav is, without a doubt, the one to watch out for. His act as the loyal man Friday deserves applause. His quirks and the way in which he performs without saying too much, that is stupendous.

The production design of the show is another aspect that is commendable. The grand locales look fantastic when represented along with the story.

The story by Ananya Banerjee is unique, and it did have a lot of potentials.

The rest of the cast is utterly wasted. I wonder what led to Naseeruddin Shah, Lara Dutta, Soha Ali Khan, Kritika Kamra, and Anya Singh signing up for this mess of a screenplay! While they were all given great screen space, there was not enough material for them to showcase their prowess.

As far as the direction by Gauravv Chawla and Ananya Banerjee goes, they’ve squandered a great plot. The story about a king longing for his daughters and faking his own health issues in order to bring them all back to the kingdom is actually fairytale-ish. In these times of the pandemic where people have started getting closer to their families, the plot looked like a killer one. However, the screenplay is absolutely amateurish. It’s hard to believe that Chawla is the same person who made the 2018 flick ‘Baazaar’, which was praised for its good direction, despite the movie not getting great box-office returns.

The major problem with the show is that it’s touted to be this comedy-drama of a dysfunctional family, but the humour is abjectly missing. In the almost 300 minutes of screen time, there are maybe 5-10 minutes where you actually end up smiling, and that too not laughing. It is not that the show wasn’t meant to be funny, but it’s the jokes, punchlines, and situations, which should have been funny, are actually not onscreen.

There are lots of unanswered questions in the scheme of things, which you’re hoping to get answered at the end. One of the most important unanswered questions is why the four women are so fond of these ‘Squid Games’ sort of sports – a key plot around which the entire show is based? Also, what drew the sisters away from the father and the family home? Did he do something to them? If yes, then what? There are millions of such poignant queries. However, the makers simply decide to not get to that closure point and rapidly just end it, trying to make it be a bit emotional.

One of the dialogues during the climax of the show, said by Naseeruddin Shah, goes something on the lines of Shikharwati doesn’t lie its grandeur and opulence, but it much rather lies in your hearts. Sadly, this show doesn’t reach your heart at all. Forget about touching it and making an impact in your minds and senses. The show can be easily skipped, but if you’re a huge fan of the dysfunctional family genre, you might just be able to sit through the entire 10 episodes, maybe once. Others, please AVOID. I am going with one a half stars.