With the release and re-nomination of 105-member sitting MLAs list, TRS chief has demonstrated his trust and confidence in his team. 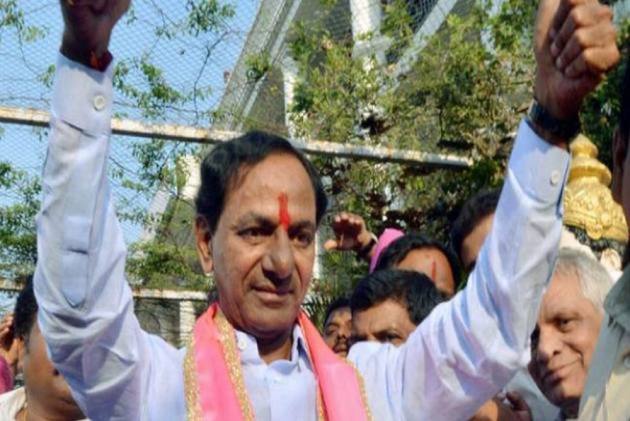 Call it unprecedented or a ‘script’ followed on expected lines, Telangana Chief Minister K Chandrasekhara Rao, who dissolved the assembly on Thursday, has thrown an open challenge to his arch opponents to prove that his party will remain in power.

Shortly after his big political gambit, KCR announced candidates of the ruling TRS for 105 of the 119 assembly seats and launched an attack on the Congress, calling the party Telangana's "enemy number 1" and its president Rahul Gandhi the "biggest buffoon" in the country.

He also said that his party would not like to become a slave to Delhi.

In the recent past, speculation was rife over KCR’s decision to dissolve assembly and go for early polls.  Congress, the main opposition rival, had challenged him to opt for early polls instead of simultaneous elections with Lok Sabha scheduled in April/May 2019.

On Thursday, KCR chaired a meeting of the state cabinet, which adopted the resolution urging Governor E S L Narasimhan to dissolve the House.

The governor accepted the recommendation and dissolved the Assembly soon afterwards and asked KCR to continue as caretaker chief minister.

Opposition Congress and the BJP questioned the Governor’s decision.

“Where is the hurry for the Governor to accept for dissolution of the assembly without consulting the Opposition?” they asked.

Responding to the Congress manifesto, KCR said, “Since we have implemented all the schemes successfully, now they (Congress) have come out with a few hundreds more to lure people.  People are not fool, and they will not fall prey to Congress’ false promises.”

KCR also said the Congress party is scared and blamed them for criticising his government’s welfare schemes.

He said Telangana’s GDP has grown at 21.93 per cent and other states are envious of its development.

KCR has decided to seek a virtual ‘referendum’ from the electorate, thereby exposing the Congress Party claims to regain power .

With the release and re-nomination of 105-member sitting MLAs list, TRS chief has demonstrated his trust and confidence in his team.

During the media briefing on assembly dissolution, he looked both confident and arrogant.  “We are confident to win 100 plus seats of the 119.  It will be a total wipe out for Congress.” He also said that his party is secular and continues to maintain ‘friendly relations’ with MIM.

When asked whether his party will move closer to the BJP after polls, he said; “Our gothras (DNA) are different.”