Kavitha will be elected to the upper house of the state legislature for a second consecutive term. She was elected with a huge majority to the Legislative Council from the same constituency in October last year. 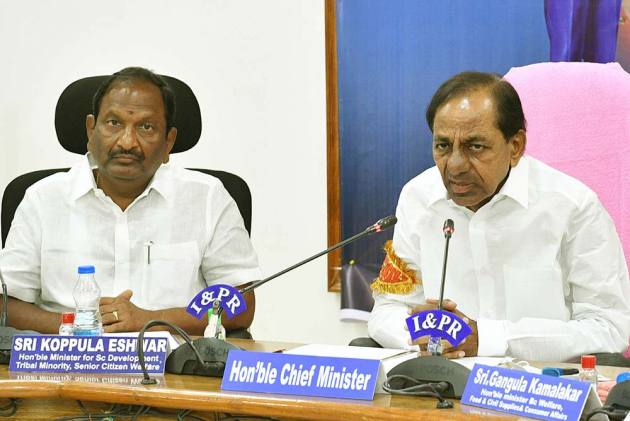 With the nomination of an independent candidate in Nizamabad constituency rejected by the election authorities, Kavitha alone remained in the fray. Independent candidate K. Srinivas' nomination was not found to be in the prescribed format. Three local public representatives also complained to the district collector that Srinivas submitted their forged signatures as proposers.

Similarly, Patnam Mahender Reddy and Shambirpur Raju of the ruling party are also set to be elected unopposed from Rangareddy district. The three TRS candidates are likely to be declared elected on Friday, the last day for withdrawal of nominations. They will receive the election certificates from respective returning officers.

Kavitha will be elected to the upper house of the state legislature for a second consecutive term. She was elected with a huge majority to the Legislative Council from the same constituency in October last year. The election was held to fill the vacancy caused by disqualification of a legislator after he switched loyalties to the Congress party before the 2018 Assembly elections.

Kavitha was sent to Legislative Council after she suffered a shock defeat in Nizamabad Lok Sabha constituency in 2019. She was elected to Lok Sabha from Nizamabad in 2014. Chief Electoral Officer Shashank Goel, nomination papers of 27 candidates were rejected during the scrutiny on Wednesday. Most of them were independent candidates. Officials said their nomination papers either did not have signatures of the proposers or the signatures were not genuine.

According to the rules, the nomination papers should carry names and signatures of 10 per cent of the total electors or 10 voters. A total of 71 candidates, most of them independents, are in the fray in these constituencies. As many as 24 candidates are in fray in Karimnagar and Adilabad each. The opposition Congress party has filed its candidates in Medak and Khammam constituencies.

If there are no withdrawal of nominations by independents and others contesting against TRS candidates, elections forA nine seats of the Council will be held on December 10. Local bodies' representatives are eligible to cast their votes in these constituencies. Counting of votes will be taken up on December 14.