The UP Congress party raised the demand during its meeting with Chief Election Commissioner Sushil Chandra and elections commissioners Rajeev Kumar and Anoop Chandra Pandey. 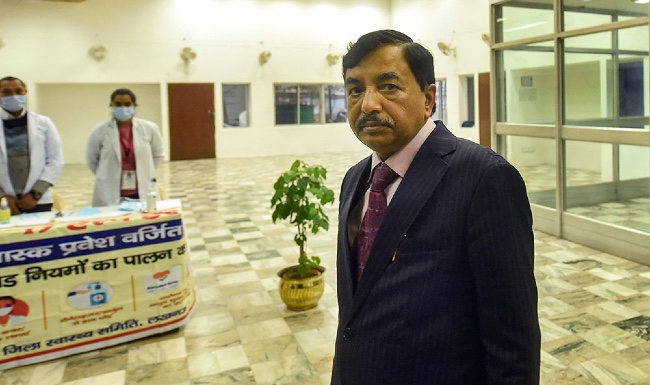 The Congress on Tuesday demanded from the Election Commission of India to keep Uttar Pradesh Additional Chief Secretary (Home) Awanish Awasthi away from the poll process of the state assembly so that he does not “affect” it.

The CEC and the two ECs reached Lucknow on Tuesday evening and are slated to take stock of the state’s poll preparedness over the next few days. The poll panel’s 13-member delegation is on a three-day visit to the state.

As part of its review of the Uttar Pradesh poll preparedness, the Election Commission held a series of meetings with the representatives of various political parties which raised their specific poll-related demands and concerns.

While the Congress party sought the side-lining of the state’s key bureaucrat, the UP BJP urged the poll panel to depute women security personnel at every polling booth in the state to identify genuine women voters.

The Samajwadi Party on the other hand urged the poll panel delegation to prepare a separate list of specially-abled voters and those above the age of 80 years and arrange for them to vote from their homes.

"UP's Additional Chief Secretary (Home) Awanish Awasthi be kept away from the electoral process as he may affect polls," UP Congress leader Virendra Madan said in a statement here after the meeting of the Congress delegation with the poll panel functionaries.

UP BJP general secretary J P S Rathore also told PTI that his party made three points to the poll panel, including a request to it to ensure that the voters from the same family can exercise their franchise at the same polling booth.

"The first point was that women security personnel should be posted at every booth so that they can provide security top women and if needed, the women police personnel are roped in to identify genuine voters,” Rathore said.

“Secondly, we requested the Election Commission to ensure that voters from the same family should be able to cast their votes at the same polling booth. Apart from this, a request was also made to relocate the polling booths from densely populated areas to less populated areas so that the Covid protocol can be followed,” he said.

In a statement issued here after its delegation’s met the CEC and ECs, the Samajwadi Party said it demanded a free and fair election. "The SP demanded that a separate list of voters above the age of 80 years and 'divyaang' (specially-abled) ones be prepared for all assembly constituencies. The list should be made available at all polling booths. The number of such voters in the state is 40 lakh,” it said.

“On January 5, 2022, when the final voters' list is published, this list should also be provided. Such voters should be given the option of voting from their homes," it added.