The Punjab model will have a 10-point agenda which will include providing free power to people up to 300 units per billing cycle and controlling the drug menace, he said. 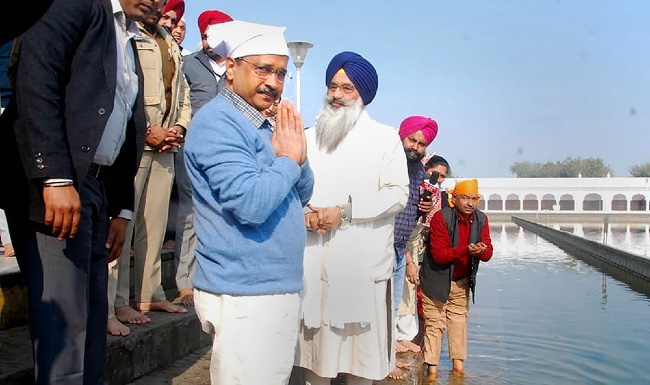 Unveiling his party's "Punjab Model" ahead of assembly polls, AAP national convener Arvind Kejriwal on Wednesday promised justice in sacrilege cases, jobs to youth, corruption-free governance, and asserted that people want to bring his party to power to break the friendly "partnership" between the Badals and the Congress.

The Delhi chief minister said that with the announcement of polls, people are happy that they have got an opportunity to bring a change. "In 1966, Punjab became a separate state. Since then till today, for 25 years Congress ruled the state while for 19 years the Badal family ruled. Both ruled the state in a partnership of sorts. Whether the Badal party came to power or the Congress, they ran their governments in partnership. When their government used to come to power, they never used to take action against each other," Kejriwal said at a press conference in Mohali.

Accusing the Badal family and Congress of looting the state, he said, "This time people have made up their mind to break this partnership and bring government of common people, common Punjabis", and added that people have made up their mind to give one chance to AAP. Spelling out the AAP's agenda if it comes to power, Kejriwal said he, AAP state unit chief Bhagwant Mann and other leaders have been touring Punjab over past many weeks and meeting people and based on the inputs they got from various sections of people, the party has prepared the "Punjab Model".

Punjab Congress chief Navjot Singh Sidhu had earlier shared the roadmap about his "Punjab Model". "When AAP will form government, we will make a new Punjab, which is prosperous and which will usher in growth," said Kejriwal, whose party is eyeing to wrest power from the Congress. Touching upon the 10-point agenda, Kejriwal said employment avenues will be generated in the state and youth who have left for greener pastures including Canada will contemplate coming back once they get jobs in their own state. He said it will be the AAP's priority to control drug menace which, he said, is continuing as before as drug mafia enjoys patronage from powers that be.

Establishing peace, harmony and brotherhood in the state and giving justice in sacrilege cases and strict punishment to the culprits involved is also on the party's agenda, he said, adding there have been so many sacrilege incidents, but not even in one case anyone has been punished. He also promised to give corruption-free Punjab, where the common man, "who has to give bribe to get his work done," will no longer have to do that.

Among other agenda points of the AAP's "Punjab Model", Kejriwal promised to improve the state of education and health in the state, where condition of government schools, hospitals will be improved while 16,000 "Mohalla Clinics" will also be opened in the health sector. Kejriwal said women above 18 years will be given Rs 1,000 per month. All issues of farmers will be resolved while a "raid raj" and "corruption" will be eliminated and a congenial atmosphere will be created for trade and industry to flourish, he added.