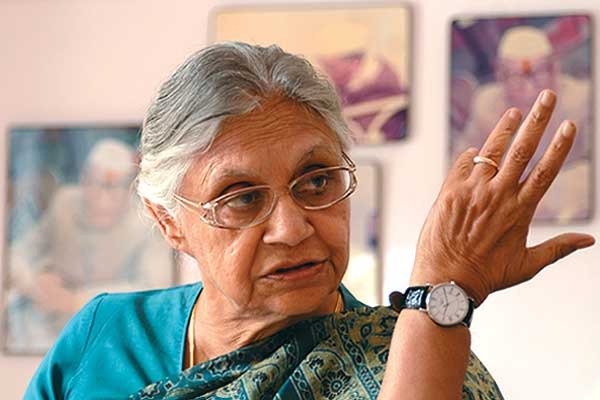 Criticising AAP ministers for staging a sit-in at the lieutenant governor's office, Congress leader Sheila Dikshit on Friday said Chief Minister Arvind Kejriwal should first read the Constitution and then approach the prime minister and the Parliament for full statehood to Delhi.

Dikshit said the role of the Delhi lt governor and the chief minister is defined in the Constitution and wondered why AAP leaders were protesting at Lt Governor Anil Baijal's office since Monday. "What is his (Kejriwal's) intention behind it?"

At a press conference, the three-time Delhi chief minister said she feels "ashamed" that a chief minister is releasing photos on the Internet sitting on a protest at the L-G's office.

Contrasting her governance with that of the Aam Aadmi Party, she said the BJP ruled at the Centre when she became the Delhi chief minister in 1998 and there was no conflict between them.

She said the Congress party also demanded full statehood for Delhi, but it never politicised the issue.

She said Kejriwal must understand that Delhi is a Union Territory and he is wrong if he thinks he can have a governance model like Haryana and Uttar Pradesh.

The former Delhi chief minister, however, said people understand the politics behind dharnas "as they are not fools".

Delhi Pradesh Congress Committee chief Ajay Maken said the AAP and the BJP are doing "dharna politics" as they are "not serious" about public issues such as water shortage.

"The dharna by both the parties is a part of well-planned strategy. The script of this strategy had been written when the chief secretary was assaulted at the CM's residence... AAP is doing dharna to divert attention from its failure on public issues," Maken told reporters at the same press conference.

Kejriwal and AAP ministers Manish Sisodia, Gopal Rai and Satyendar Jain have been staying put at the waiting room of the L-G office over their demands, including a direction to IAS officers to end their "strike" and action against those who have struck work.