The BJP has also alleged that the attempt to implement the verdict was a "conspiracy" to destroy the hillock shrine, where lakhs of people from the country and abroad visit during the three-month-long pilgrim season. 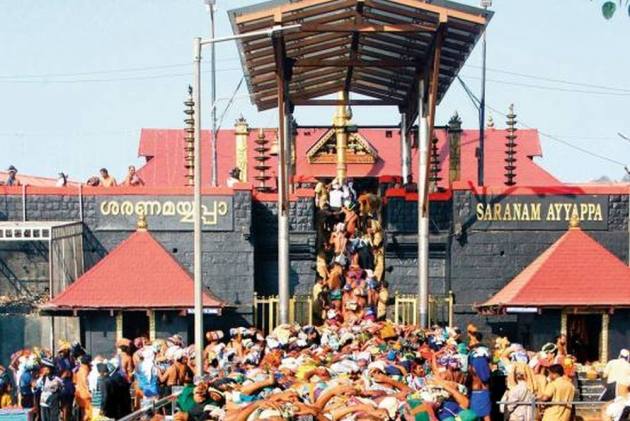 To protest the implementation of the Supreme Court verdict that allows women of all age groups to enter into the Sabrimala shrine, thousands of BJP activists on Monday marched towards the state secretariat in Thiruvananthapuram.

In another development, the Travancore Devaswom Board has convened a meeting of various stakeholders of the shrine including the Tantri (head priest) family, Pandalam royals and Ayyappa Seva Sangam here tomorrow.

The meeting, called to discuss the preparations of the three-month-long annual Mandalam-Makaravilakku pilgrim season starting from November 17, was expected to discuss the recent Apex court order also.

The shrine will reopen on Wednesday for monthly rituals.

BJP activists, including a large number of women and children, marched to the administrative hub, secretariat , chanting mantras of Lord Ayyappa and holding the garlanded pictures of the deity.

The mammoth foot march, which started last week from Pandalam, was in protest against the Left government's decision to implement the top court order without considering sentiments of believers and Lord Ayyappa devotees.

The BJP has also alleged that the attempt to implement the judgement was a "conspiracy" to destroy the hillock shrine, where lakhs of people from the country and abroad visit during the three-month-long pilgrim season beginning mid-November.

Pillai said if the state government failed to resolve the issue at the earliest, the BJP-NDA's agitation would take a new turn.

"We will meet each villager in Kerala and chalk out a massive agitation plan to protect the Sabarimala Temple, its centuries-old traditions and the sentiments of Lord Ayyappa
devotees," he said.

Claiming that their first phase of the Sabarimala stir was a major 'milestone,' the BJP said if the CPI(M)-led LDF government does not find a solution in the next 24 hours, the party-led NDA would chalk out a 'massive' agitation plan to reach their goal.

The Sabarimala Temple, opening on October 17 evening, would be closed on October 22 after the five-day monthly pooja of Malayalam month of 'Thulam'.

Heavy security arrangements were put in place across the capital city, especially on the routes through which the BJP foot march passed.

Kerala has been witnessing a series of agitations by various devotee groups and Hindu outfits for some days demanding that the sanctity of the temple rituals be protected.

On September 28, a five-judge Constitution bench, headed by then chief justice Dipak Misra, lifted the ban on the entry of women of menstrual age into the shrine.