On Saturday night, Christmas day celebrations by migrant labourers from the north east part of India at Kizhakkambalam turned violent, leading to several policemen being brutally assaulted and two police jeeps badly damaged, with one set on fire. 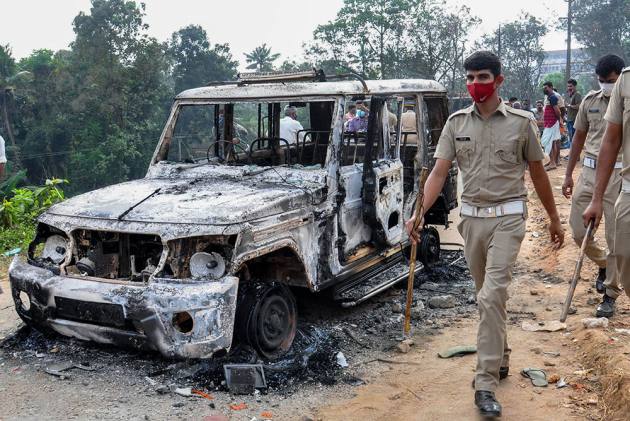 Fifty people were arrested in connection with the Christmas day violence in the Kizhakkambalam area of Ernakulam district and produced before a magisterial court here, police said on Monday.

On Saturday night, Christmas day celebrations by migrant labourers from the north east part of India at Kizhakkambalam turned violent, leading to several policemen being brutally assaulted and two police jeeps badly damaged, with one set on fire. Eight policemen, including a Circle Inspector, were injured in the violence and subsequently, police lodged two cases -- one for the assault on the officers which also includes attempt to murder charges and the other for destruction of property -- and arrested 50 people in connection with the incident.

It had initially taken 150 people into custody on Sunday morning itself. Rural SP K Karthik had said that two cases have been lodged in connection with the incident on December 25 night and the investigation was going on to identify all those involved in it and to collect evidence. Visuals of the violence which went viral on social media showed a large group of people surrounding the police vehicles, climbing on top of them, pelting them with stones and then thrashing them with sticks, leaving the vehicles in shambles. Subsequently, after the policemen retreated to safety, the workers set fire to one of the vehicles.

Kitex Managing Director Sabu Jacob, had later told the media over the phone, that "the workers had brutally assaulted the police officers, including a Circle Inspector, who had reached the spot to resolve the arguments between two groups of labourers on Saturday night." He had said that initially the camp security and the supervisors tried to intervene and resolve the issue, but they too were assaulted and thereafter, the police were called. However, when the police arrived, the "uncontrollable" workers brutally attacked the officers.

Jacob had further said that there was no criminal intent behind what happened and claimed that drugs were brought into the camp and some of the workers were probably under its influence, leading to them becoming "uncontrollable". He had also said that his company would cooperate with the investigation.