A church representative from India is in the Vatican to discuss the issue of a rape charge against the Bishop by a Kerala-based nun. 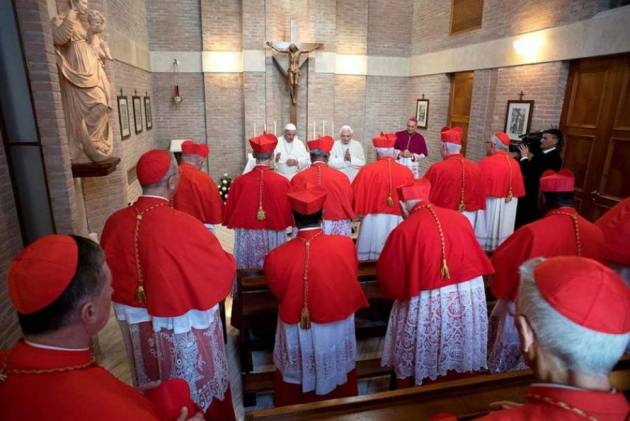 The Vatican, the highest seat of authority in the Roman Catholic Church hierarchy, has formed a one-member panel to probe the rape allegations by a nun in Kerala against the Bishop of Jalandhar, Franco Mulakkal.

Sources told ANI that a church representative from India is in the Vatican to discuss the issue of a rape charge against the Bishop by a Kerala-based nun.

The development followed after the nun wrote to the Apostolic Nunciature- the representative of the Pope in India- describing the ordeal she allegedly went through at the hands of Bishop Mulakkal.

Sound Of Silence In God’s Court

The reaction from the Holy See has come amidst Pope Francis ordering an investigation into the sexual misconduct by an American bishop Michael J. Bransfield who recently resigned from the Diocese of Wheeling-Charleston, West Virginia. The pontiff, on Thursday, met the US Catholic church leaders to discuss the scandal that has sparked a furore over clergy abuse crisis.

Meanwhile, Jalandhar police on Saturday served a notice to Bishop Franco Mulakkal to appear before Kerala police on September 19.

"Jalandhar Bishop Franco has been served notice to appear for interrogation on September 19. A criminal case has been registered against Missionaries of Jesus for publishing a letter as well as a photo of the victim nun," Kottayam Superintendent of Police Harishankar told ANI.

Back home, Bishop Mulakkal, who has been summoned by the Kerala Police for questioning on September 19, informed that Monsignor Mathew Kokkandam will administer the Diocese of Jalandhar in his absence.

In a written communication addressed to the members of the Diocese, Bishop Mulakkal announced that Father Joseph Thekkumkattil, Dean of Tanda Deanery and Father Subin Thekkedathu, Parochial Vicar of St. Mary's Church, Tanda will step in for the Bishop in addition to their present roles.

Bishop Mulakkal, in his letter, also requested members of the Diocese to pray for him, the victim and her supporters hoping that "divine intervention" will cause a "change of heart."

"As you have probably come to know from the media the investigation into the allegations raised against me there are several contradictions in the evidences collected against me as per the report of the police. It is reported that I am likely to be called for further clarifications by the investigating officer in Kerala. I request you to continue to pray for me and for the alleged victim and her supporters who have come out against me so that divine intervention may bring about a change of heart and the truth of the matter may be revealed. I leave everything into the hand of God as I await the result of the findings of the team probing the allegation," the letter read.

The nun from Kerala has accused the 54-year-old Bishop of raping her on several occasions between 2014 and 2016.