The SIT of Kerala police probing the case of alleged rape of a nun by a bishop resumed questioning him Thursday even as the state police chief said a decision on Franco Mulakkal's arrest could be taken in a day or two. 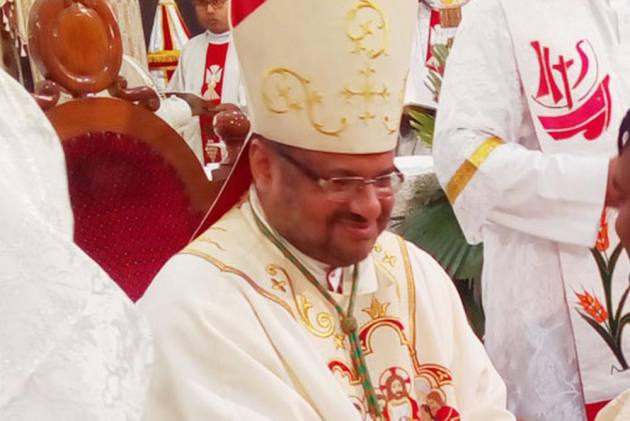 Jalandhar Bishop Franco Mulakkal, accused of raping a nun, was Monday temporarily relieved of his pastoral responsibilities by Vatican.

The Pope took the decision in response to Mulakkal's September 16 letter offering to "step aside temporarily" as the Bishop of the Jalandhar diocese, Kerala Catholic Bishops Council Spokesman Fr Varghese Vallikkattu told PTI.

He wrote the letter after Kerala police summoned him to appear before it for questioning in the case.

A statement by Catholic Bishops Council of India said, “The Holy Father has received the request of Bishop Franco Mulakkal to be temporarily relieved of his pastoral responsibilities in the diocese of Jullandar. Having considered all circumstances the Holy Father has accepted this request opf Bishop Mulakkal and has appointed Bishop Agnelo Rufino Gracias, Auxiliary Bishop Emeritus of the Archdocese of Bombay as Apostolic Administrator of the diocese of Jullandar, with immediate effect (sic)”

Earlier, the SIT of Kerala police probing the case of alleged rape of a nun by a bishop resumed questioning him Thursday even as the state police chief said a decision on Franco Mulakkal's arrest could be taken in a day or two.

Hours after Mulakkal, accused of repeated rape and sexual assault, appeared before the Special Investigation Team for interrogation, the state's DGP Loknath Behera said the investigating officer will decide on whether to arrest him once the examination got over.

He said the investigating officer was free to take a call on the issue.

When asked whether Mulakkal can be arrested before September 25, the day his anticipatory bail plea will come up for hearing in the high court, the top police officer said, "I think, legally there is no problem. There is no such law (that bars arrest during pendency of bail plea). That we will discuss with the legal team."

Citing convention, legal experts had said the priest is unlikely to be arrested before September 25.

Mulakkal, the bishop of the Jalandhar diocese of the Missionaries of Jesus, the congregation to which the alleged victim also belongs, was grilled by the SIT headed by DySP K Subhash for seven hours Wednesday. He was asked to appear before it again today.