Kerala’s Controversial Jeweller Boby Chemmanur Pays Rs. 500 To Get Jailed For A Day, Says He Always Wanted To ‘Feel The Jail’ 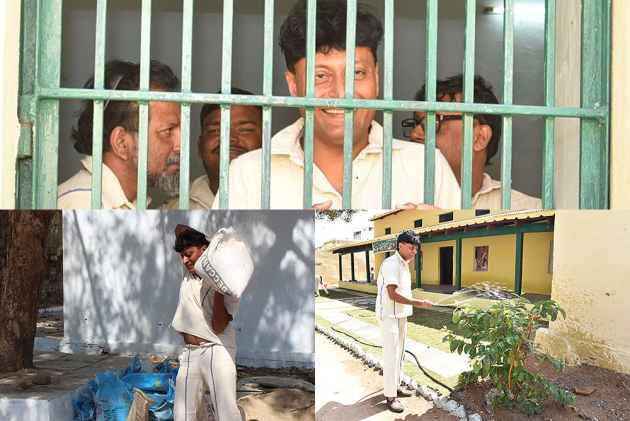 Kerala’s controversial jeweler Boby Chemmanur hit the headlines today for paying Rs.500 to get jailed for a day.

Boby, known for his spartan dress code but flamboyant lifestyle, spent a day at the Sangareddy Jail in Hyderabad as part of the prison tourism initiative.

During his one-day term, he watered the plants on the jail premises and carried loads on his shoulder like a normal prisoner would do.

Speaking to Outlook, Boby, Chairman of the Bobby Chemmanur International Jewellers Group, said he had always wanted to “feel the jail”. “I had even tried to get jailed some 15 years ago,” he said.

“I had expressed my desire to spend a day in jail to my friends in the police department in Kerala. But, they told me that there is no opportunity to stay in jail without committing a crime. They were afraid that they would lose their job if they let me in.”

Later, he came to know about the ‘Feel the Jail” tourism initiative by the Sangareddy Prison, a first of its kind in the world. Opened for tourists in June 2016, the jail allows common men to spend 24 hours inside the prison, which was built during the Nizam era in 1796.

Asked about his experience in the jail, Boby said he spent the whole day and night there just like a prisoner, wearing jail clothes with the number 50, doing all the manual labour there, and eating rice and daal served to the inmates.

There were three more inmates in his cell. He also met five murder convicts in the jail.

Earlier, Boby had run a marathon from one end of Kerala to the other covering over 800 kms with an aim to promote blood donation in the state. He had also surprised Keralites by organizing a huge public event with football legend Diego Maradona, who is now a brand ambassador of Boby & Maradona Gold Diamond Jewellery.

Boby said he will soon meet Maradona and invite him to the “feel the jail” initiative.

Boby, also happens to be one of the most controversial jewelers in Kerala. In 2015, then Opposition leader V S Achuthanandan had sought a detailed inquiry into allegations that Chemmanur Group had collected crores of rupees from investors violating the norms of SEBI and RBI. According to a report by the Indian Express,the TV channels and newspapers in Kerala had completely covered-up the press conference of the Opposition leader.

During his conversation with Outlook, Boby described himself as a “brash person” and laughed. “I always wanted to do things that others don’t do. Everyone is afraid to go to jail. So I wanted to do it. Don’t we have only this life to experience everything?,” he said, adding, “Now I know how a jail inmate feels.”