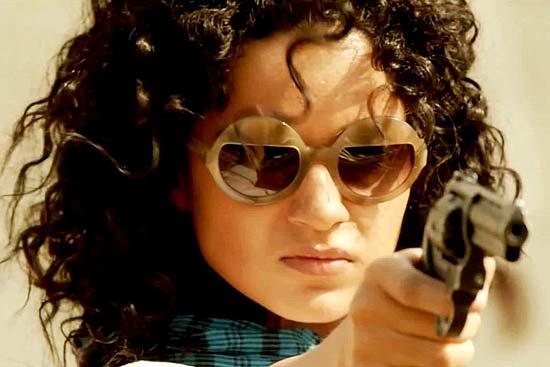 The corners of the universe in which people talk about Hindi movies have been abuzz of late with praise for Kangana Ranaut and her excellent performance in Tanu Weds Manu Returns. She plays two characters, two very different women, and inhabits them both with riveting intensity. As the fiery Tanu, her eyes glow when she's angry and sparkle when she's mischievous, and she seems set to steamroll anyone who gets between her and a good time. Yet when Tanu cracks with vulnerability toward the end of the film, her entire body language changes, drained of all that crackling energy. And Ranaut also offers up Kusum, a young athlete with a square and confrontational confidence that couldn't be more different from Tanu's impulsive and flirtatious demeanor. And then Kusum has a vulnerable moment too, in which all her upright dignity crumples.

The praise that has been heaped on Kangana Ranaut for this work is certainly deserved; it's a thrilling performance, by far the movie's greatest asset. And it's not the first time Kangana Ranaut has shown this kind of range, embodying swagger, sexiness, impulsiveness, confidence, and raw vulnerability all in one film.  After a patchy start to her career, in which her ability shone through in some roles and was squandered in others, she broke out a little over a year ago in Queen, which everyone watched, and everyone loved. But my favorite Kangana Ranaut performance, just as rangy as Tanu Weds Manu Returns, and in its own demented way just as sympathetic as Queen, is in a movie that came and went with little notice last fall: Revolver Rani.

Set in the baked, dusty landscape of Chambal, Revolver Rani is populated by familiar archetypes of political satire. There is a corrupt agriculture minister, Udaybhan Tomar (Zakir Hussain), whose election victory opens the film, financed by shady land developers. Behind the scenes on both sides of the election are Machievellian operators pulling strings on the candidates they choose to front their parties. And everyone with any power has an entourage of hangers-on who remain loyal only until the money stops coming. And the movie executes all this quite well, making for a satisfyingly blunt send-up of political scheming in the hinterlands.

But it has something else, too: It has Alka Singh (Ranaut), and Revolver Rani is uniquely her story; in her, it takes on a dimension beyond political satire and black comedy.  Alka is Udaybhan's chief political rival; she is a charismatic leader, champion of Chambal's indigenous tribals, and completely, utterly unhinged. Raised by her power-hungry uncle Balli (Piyush Mishra) and groomed to stand elections on his behalf, Alka has endured more than most, including the assassinations of her father and husband, killings that she avenged with her own hand.  With no model but a manic culture of violence, Alka is herself manically violent; she is wild and impulsive, and quite patently nuts. Raised on a steady diet of toxic masculinity, Alka knows nothing else, and so in her own behavior she displays a wild and swaggering caricature of aggressive masculinity.

And there is Kangana Ranaut, diving into the lunacy of this role with complete physicality, squaring her tiny frame with swagger and bravado. She not only waves guns around, but fires them into the air at whim; from impulsive glee to fiery rage; gunfire punctuates any strong emotion Alka experiences. When she meets a man she likes, she squints at him with predatory hunger; and she not only claims him as her lover but possesses him jealously, acting out a traditionally male sense of both dominion over and protection of a partner. When Alka operates so far outside the sphere of behavior assigned to her sex, it signifies that the character is loony; it is a measure of her insanity, and Ranaut embodies the insanity broadly, wholly, and fearlessly.

Yet Revolver Rani is remarkably sympathetic and compassionate toward Alka who seems to have a dim but growing awareness of her own deficits. Deprived of a girlhood, Alka now craves the expression of femininity — a tragically warped idea of femininity for sure, but still femininity as she sees it. Because of this craving, Rohan Kapoor (Vir Das), a decidedly third-rate aspiring actor who wants a sugar-mama to finance his first-rate Bollywood dreams, can seduce Alka with simple, girlish trappings like flowers and teddy bears. And because of this craving, Alka models for Rohan her idea of the best of avant-garde fashion from Italy: outrageously spiked and barbed metal brassieres that look like seconds from the wardrobes of female-warrior superheroes. And because of this craving, Alka clings to Rohan with a suffocating sense of possession, and later to the prospect of motherhood at the cost of all else; these are the only salves for Alka's sense of absent femininity.

There is a sadness to all of this, and the sadness is not lost on Alka, who occasionally betrays it with a subtle distant look that plays across her face, rippling the broadly manic expression that is her baseline. And these is the best in Kangana Ranaut's performance, those that convey best how well Ranaut understands her character and how powerfully she can convey her.  Because there is nothing subtle about Alka, who is most in her element when she crashes her election opponent's victory rally, guns blazing, from the top of a jeep. Alka plays to the back of the house, always scowling, shouting, gesticulating, or firing pistols from both hands. And yet Ranaut paints more delicate lines on that broad canvas, with a flicker of eye or nostril or lip that betrays the need and vulnerability that insinuate cracks into the foundation of Alka's brash, impulsive facade.

Even the shallow, deceitful Rohan sees this, sometimes, and is moved by it, as in one poignant sequence when Alka takes him to the vast, sparkling film studio she has built for him, which is part theme park, part relic, and part fantasy. They dance together, and for a brief spell both Alka and Rohan can imagine their dreams fulfilled. It is Rohan's one glimmer of humanity in what is otherwise a despicable character arc from manipulation to deception to outright betrayal. Rohan is a worm, utterly unsympathetic even when kidnapped by the Tomar brothers and strung up like Dharmendra in Sholay. Rohan takes advantage of Alka's peculiar innocence, that childlike openness that persists even when she explodes in rage or gunfire.  Though Rohan is a victim, too —  first of Alka's demented possessiveness and later of her uncle's machinations — he remains so utterly spineless throughout that his victimhood never evolves into sympathy.

Rohan is just one of Revolver Rani's array of schemers, liars, and cheaters, none of whom —  except Alka herself — is the least bit likable. It makes for a very enjoyable black comedy, this stage where everyone is a villain except for the one who is palpably insane. And just as the clever, rapid-fire comedy of Tanu Weds Manu Returns is elevated by Kangana Ranaut's bold and nuanced performance, her mad and memorable rendering of Alka helps make Alka as appealing as she is, and helps make Revolver Rani a rich and layered film. At the film's released, Ranaut's strong work in it was noted by a few critics, the movie was nevertheless a disastrous flop; hardly anyone watched it. Now, in the light of Tanu Weds Manu Returns, all are once again standing and applauding Kangana Ranaut.  And it is time to give this interesting movie — and its star's courageously dynamic performance —  another look.