Kin Of Rape Victims Should Be Allowed To Witness Judicial Proceedings In SC, Says Nirbhaya's Mother

"Just imagine, how helpless you feel when you are not able to witness the proceedings of your daughter who was brutally raped and killed in your quest to seek justice for her." 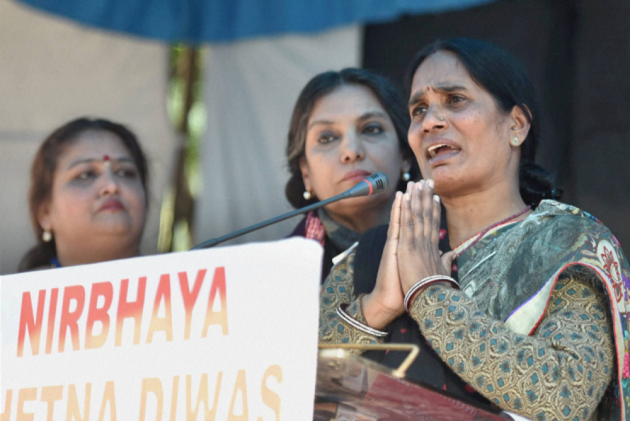 Asha Devi, the mother of the December 16 gang-rape victim, said today that the family members of rape victims should be allowed to witness judicial proceedings in the Supreme Court, which otherwise requires necessary documentation by lawyers to allow them entry inside the court room.

Devi explained the difficulties faced by her in the past in getting inside the Supreme Court room to witness the crucial proceedings of the gang rape and murder case involving her daughter.

"Just imagine, how helpless you feel when you are not able to witness the proceedings of your daughter who was brutally raped and killed in your quest to seek justice for her. After the matter moved to the Supreme court, on two such occasions we could not enter the courtroom and waited outside.

"It was only through others that we could get to know the details and developments taking place in the case," she said.

In criminal cases, the prosecuting agencies such as police and CBI and accused or the convict are the parties and hence they are allowed to witness the court proceedings after lawyers concerned verify their applications for entry.

With a streak of tear sliding down her cheek, Devi said that she has been fighting for justice for her daughter for the last six years and still the culprits have not been hanged.

"The loopholes and the slow-moving process in our system makes me lose faith in the judiciary but then when another woman gets raped, my resolve to secure justice for my daughter and set an example gets strengthened," she said.

She expressed her disappointment and surprise over many auto-rickshaw drivers not agreeing to drop women or girls if their destination is out of their way and charge hefty amounts, even six years after the Nirbhaya incident.

"I thought my daughter's sacrifice would at least change their mindset and they would never deny to drop any women passenger, but nothing has changed. The number of rape incidents has grown immensely and women still continue to be unsafe. It is shameful that in a country where women are worshipped as goddess, women on the streets live in fear," she said.

The parents of Nirbhaya, who started the "Nirbhaya Jyoti Trust", to provide pro bono legal advice and litigation support to needy female victims of violent crimes, have sought enforcement of a Women Safety Guarantee Rights Act which should provide an assurance of security to every women including foreigners.

The apex court had on May 5, 2017, upheld the verdict of the Delhi High Court and the trial court awarding the capital punishment to four convicts--Mukesh (29), Pawan (22), Vinay Sharma (23) and Akshay Kumar Singh (31) for gangraping a 23-year-old student inside a moving bus in South Delhi.

The paramedic student was gang-raped on the intervening night of December 16-17, 2012 inside a moving bus in South Delhi by a gang of six persons and severely assaulted before being thrown out on the road naked. She succumbed to her injuries on December 29, 2012 at Mount Elizabeth Hospital in Singapore.

Another accused in the case, Ram Singh, had allegedly committed suicide in Tihar Jail, while a convicted juvenile has come out of the reformation home after serving a three-year term.