A beef festival, slated for later this month in Kolkata, has been cancelled over security concerns after its organisers received over 300 calls, many of them threatening. 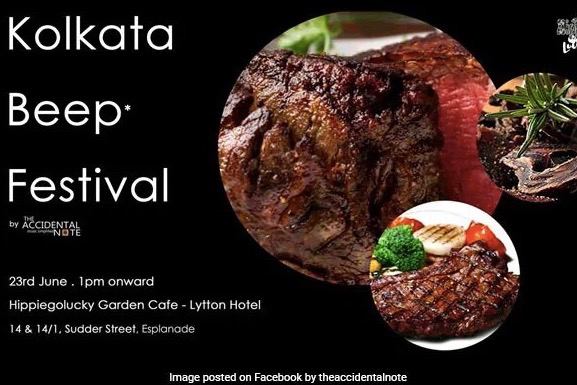 A beef festival, slated for later this month in Kolkata, has been cancelled over security concerns after its organisers received over 300 calls, many of them threatening.

The festival landed in controversy right from the start due to the word “Beef”. Set to be held in a café central Kolkata's Sudder Street on June 23, the organisers changed the name to “Beep Festival” on Thursday in order to decrease the “negative response”.

However, on Friday the organisers decided to scrap it altogether.

“We are afraid because everything has been blown out of proportion somehow. Things are not in our control anymore. For all of these reasons, the Kolkata Beep Festival stands cancelled," The Accidental Note, the event organising company, wrote in a Facebook post.

The event management team had put up a Facebook post stating that "one of their team members received over 300 calls yesterday, a lot of them to show support, but a lot of them were direct threats".

Beep* Festival in Kolkata called off after 300+ threat calls in last 24 hours. Originally called Beef Festival, was to serve pork too, so later renamed Meat Festival. After threats, the latest avatar was Beep* But that's now cancelled too. Organizers scared out of wits.

“I have been getting continuous calls and had to deactivate my social media account as well. I got calls from Rajasthan, Uttar Pradesh and other places," one of the team members told IANS.

He reiterated that the "event had nothing to do with politics or religion".

"I am a secular person... my food habit says so... I had pork and beef together many times... just for the sake of maintaining secularism," a Facebook user wrote.

The festival with a wide variety of beef preparations ranging from tenderloin, back ribs and Bolognese pasta to burgers 'was aimed to celebrate good food'.

"Most importantly, we cannot ensure the safety of all of you amazing people who were planning to attend and our team", the post added.