Thousands of people travelling in the peak evening hours were inconvenienced owing to the incident. 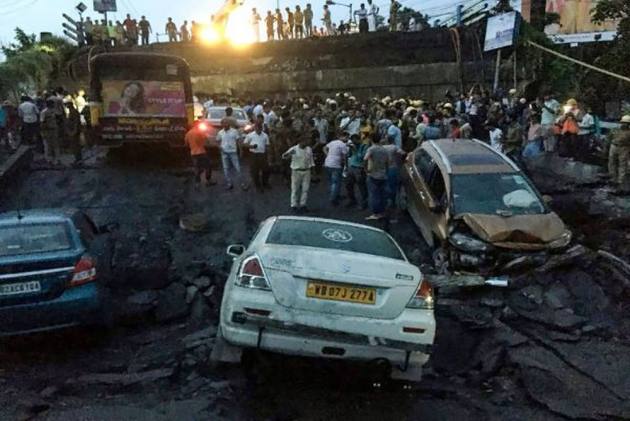 Transport services connecting the vast areas in the south-western part of the city and South 24 Parganas district were severely affected owing to collapse of a portion of a over bridge at Majherhat on the arterial Diamond Harbour Road Tuesday.

Images from the spot potrays a picture of destruction after the collapse of the 40-year-old bridge.

More visuals from the spot where part of Majerhat bridge in South Kolkata has collapsed. #WestBengal pic.twitter.com/Jg75o9qFzI

Traffic from various parts of South 24 Parganas and Behala area in the city were being diverted from Diamond Park area, the officer said.

Movement of traffic towards south-west Kolkata and South 24 Parganas were being diverted from Kidderpore and through Port area and Circular Garden Reach Road, he said.

Train services in Circular Railway and Sealdah-Budge Budge line have been suspended as precautionary measure following the collapse of a portion of the bridge at 4.45 pm, Eastern Railway spokesman R N Mahapatra said.

The collapse of a portion of the bridge over railway tracks occurred in the adjacent areas of Circular Railway line at Majherhat, leading to a signal post on the track being damaged by the debris, Mahapatra said.

Train movement through Majherhat had been suspended temporarily as a precautionary measure, he said.

Train services on Budge BudgeSealdah line may be restored after ensuring the safety in train running, he said.

Thousands of people travelling in the peak evening hours were inconvenienced owing to the incident.