The New Year started on a very sour note for Kolkata and Kolkatans, but questions remain and new accounts cast doubts on the cops' version of what exactly happened on the New Year's eve. Did the army ransack the police station, or...? Sour Start
The New Year started on a very sour note for Kolkata and Kolkatans. An ugly incident, involving army officers and high-handed cops marred what would have been the perfect start to 2007—a holiday (January 1, on occasion of Id-ul-Zuha) to nurse the 31st night hangovers and catch up on socializing.

Two army officers, the morning's papers and news channels reported, had gone to a star hotel, misbehaved with a lady, got into a fight with the bouncers there, were picked up by the cops and, since they were abusive and threatening, were dumped in the lockup. Soon enough, two jeep-loads of officers and soldiers armed with SLRs swooped on the police station, ransacked it, freed the duo and went away.

That is what the police told the media, and that was what the media told its readers/viewers, often with a lot of spice added to it. Subsequent events, however, proved the police claims to be false and, as of now, the cops are trying their best to keep away from the court of inquiry set up by the army to probe the incident. Proof enough that the cops have a lot to hide. But more of that later.

Soon after this, the state government's mega plans to have a SEZ at Haldia ran into rough weather and the violent clashes, killings etc at Nandigram hogged the headlines. An embattled state government tied itself up in knots further by resorting to draconian measures to silence opposition, a glaring example being the ham-handed manner in which it arrested Medha Patkar who has launched a battle on behalf of the land-losers at Singur and potential land-losers at Nandigram.

And just when things seemed to have been brought under control at Nandigram with an admission of guilt from the CM, reports have started coming in of farmers in other parts of the state where industrial projects and SEZs are to come up rising in revolt.

All in all, an ominous start to a year.

Villains of the Piece
Coming back to the New Year's eve incident, it has now been established that the cops' version was far from the truth. The actual sequence of events, for the benefit of those who don't really know (for, a large section of the media hasn't bothered to follow up on this incident), is like this: the senior among the two army officers (a Major and a Captain) who went to the party at the hotel got into some dispute with a woman; the bouncers intervened and tried to manhandle the officer, who fought back in self-defence. The cops were called, and as is their wont, slapped the officer and abused him verbally before hauling him away to the Park Street Police station. The Captain, who didn't really know what had happened to his senior, launched a search that took him to the road outside the hotel where he was identified by the bouncers and the cops pounced on him as well and dragged him away by the collar to the thana. While he was being hauled off like a common criminal, the officer somehow managed to call up his unit from his mobile phone. And once in the thana, even though the two officers identified themselves many times, the cops, drunk on alcohol and power, threw them into the lockup.

The law says that no army man can be arrested by the cops and put in a lockup save for committing crimes like murder and rape. And if cops detain any army man, they're duty bound to inform the military police and the local army authorities at once. The cops in this case were either ignorant of the law or, as is more likely the case, simply thought they could get away by violating it as they do every day.

Meanwhile, a few jawans in uniform, led by a lieutenant colonel and another officer, reached the thana and managed to convince the cops there that the detention of the two army officers in the lockup was illegal. The cops ultimately relented and while the Major was coming out of the lockup, he spotted the cop who had slapped, manhandled and abused him earlier. Losing his cool (as any one who had been wronged would), he shouted at the cop. The jawans, on seeing their officer with bruises on his face and getting to know that it was the handiwork of the cops, were enraged and landed a few blows on the offending cops. But the lieutenant colonel intervened, pacified them, and sent them away with the two officers who had been freed from the lockup by the cops. The lieutenant colonel and the other officer stayed back at the thana to complete the formalities.

In the meantime, the cops, who felt insulted at having had to eat humble pie in their own thana, called up their seniors and together, or so the theory goes, they hatched a diabolic plan to portray the army officers and jawans as marauders and criminals who took the law in to their own hands. There's reasonable ground to believe that the cops themselves ransacked their thana and invited media persons later to pass off the stage-managed vandalism as having been committed by the army.

This account of the incident is not only what the army maintains, but also what an independent witness, who was similarly physically and verbally abused by the cops at Park Street and put in the lock up that night, has told the state human rights commission.

Smack-Happy Cops
Policemen—and not just the corrupt, lazy, inefficient and uninspiring members of the Kolkata Police force, cops all over the country—care little for civil liberties and citizens' rights. Scenes of cops slapping people, especially those from the weaker sections of society, are quite common. So, when a traffic constable on duty at Eastern Metropolitan Bypass slapped a poor rickshaw puller the other evening for a minor offence, he did so as a 'standard operating procedure'. The rickshaw-puller also took it as an occupational hazard. But none had bargained for what happened:

Governor Gopal Krishna Gandhi, who was passing by, saw this barbaric act, asked his car to stop and directed the police officer in the escort vehicle to get the identity of the rickshaw puller. Back at the Raj Bhawan, he asked senior officers of the Kolkata Police to launch a probe and get the identity of the offending cop. It so happened that the road had been cleared for the Governor's convoy to pass, but the rickshaw puller had, without knowing what was going on, tried to cross the road. Hence the slap that was witnessed by Gandhi. The rickshaw puller was identified and brought to the Raj Bhawan a couple of days later. Gandhi offered him tea and biscuits and apologized to him for the slap.

But the offending constable is yet to be identified. Once can guess that the senior cops are shielding him. To them the constable had not done anything wrong. If only they'd have been shamed by the Governor's apology. But that's expecting too much from our thick-skinned cops, or is it? 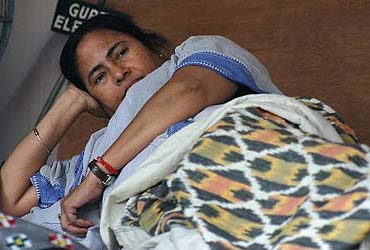 Marathon Treatment
After a marathon fast, what's following is a marathon treatment. It's been more than two weeks since Trinamool's mercurial chief, Mamata Banerjee, ended her 25-day hunger strike to protest acquisition of farmlands at Singur and, ever since, she's been at a private hospital undergoing treatment. Such a long stay at the hospital would lead one to assume that she's seriously ill and her vital organs must have suffered a lot of damage. But her physicians have been strangely reticent. And this has triggered all sorts of doubts and speculation. Like those that prevailed when she was on hunger strike, with a lot many people asking if she was really on a total hunger strike for so many days, given the fact that the long fast didn't come in the way of her delivering marathon lectures. Even on the evening she broke her fast, she did so with a five-minute-long speech that wasn't lacking in vigour and vitriol. Hard to imagine someone speaking with such gusto after not touching even a drop of water for 25 days. Mamata must surely have huge reserves of strength. Wonder why, then, has she been in the hospital for so long?

Dangerous Resurgence
One ominous aspect of this whole issue of acquisition of farmlands for industrial—or commercial and housing—projects is that the protests by farmers has spawned a resurgence of ultra-leftists or Naxalites. They made their presence felt at Singur and now, at Nandigram. The Naxalites are the ones who are leading the movement. They're the ones who taught the villagers how to hold the police at bay by cutting off communication links and deploying other guerilla tactics. Emboldened by their success in the hinterland, these Naxalites have attempted to carry out sneak strikes on targets in Kolkata—at a Tata Motors showroom last month and at the CPI(M) office just two days ago. This force ought to be nipped in the bud at once, and never mind those human rights activists whose hearts bleed for these misguided followers of Che Guevara. The havoc wreaked by the Naxalites more than three decades ago and the sufferings they inflicted on Bengal and its people are not to be forgotten or forgiven. Now that Naxalism is rearing its ugly head once again, the state government should have no qualms about lopping it off in one clean and bold sweep. Bengal cannot afford another spell of violence and anarchy that the Naxals brought upon it.

A Wish
The year may have started badly for us, but here's hoping that as 2007 progresses, things will start looking up. Hopefully, the state government will live up to its promise of taking all sections along in its drive towards industrialization. The cops, hopefully, will turn humane. More investors will set up shop here, infrastructure will improve dramatically and Bengal's gross domestic happiness (to borrow a phrase from Bhutan's king) will shoot up. This year, let's hope, ends on a happy note, since it's not begun well. So that we can say, in retrospect, all's well that ends well.