Hit by losses and demonetisation, major newspapers in Delhi and elsewhere are laying off journalists en masse. 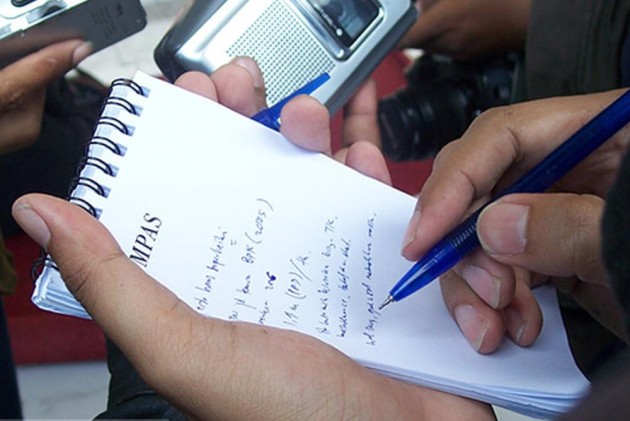 Thursday, February 2, was like any workday at 6 Prafulla Sarkar Street, the Calcutta headquarters of the ABP Group, eastern India’s biggest media house. Except of course for that niggling doubt which had been lurking beneath the surface in every employee’s mind since December last year when the company management had announced plans of downsizing the workforce, both editorial and non-journalist, by as much as between 40 and 50 percent. “When the time comes, will I stay or will I go?” Is a question that constantly gnawed at each one of them. But they brushed aside the fear, debilitating as it was, in order just to function.

“On Thursday, February 2, as usual I arrived at the office and settled down to work,” recalls an employee of The Telegraph, ABP’s English daily, the largest circulating newspaper in the eastern region. “Then suddenly I heard a scream. And then another. There were protests of ‘No, no’. Some of my colleagues were crying. Others went into fits of rage. It was as though suddenly the entire room had been sieged by invisible attackers who were shooting people down at random, paying no heed to their pleas to spare them.”

This is the only image this employee, speaking to Outlook strictly on condition of anonymity, can conjure up to describe what they (the speaker is so afraid of being identified that they have requested not to even mention the gender) call the “horror” of that black day when the company axe began to fall. “We knew it would happen but nothing prepared us for the brutality of how it happened.”  This employee said, “I somehow survived. But I am not happy. I feel as though the bloodied bodies of my friends are strewn all around me. It was like playing Russian Roulette. They died. I missed the bullet.”

The company had reportedly issued notifications to heads of the various editorial sections to make a list of employees whom they perceived to be dispensable. On Thursday they were asked to tell these employees to hand in their resignation letters. “I was told that I had better do it if I wanted things to be ‘pleasant’. Or else it would be done the ‘unpleasant’ way,” This employee told Outlook between sobs. The reference to the ‘pleasant’ way was that the group has announced that it would continue to pay the discharged employees the basic monthly salary that they were earning till the time that they retire.

“It sounds like a good deal, doesn’t it?” the retrenched employee asked Outlook rhetorically. “But it is not. The catch is that they will give you nothing in writing. The idea is to get you to resign.” The ‘unpleasant’ way – in the ‘unlikely scenario that an employee will not resign on his or her own volition – is  to fire you directly and let you go with two months’ pay.”

While the top management has by and large remained unavailable for comment an insider revealed the following to Outlook, of course strictly on condition of anonymity:

“Though the move is being attributed to demonetization there is more to the story than meets the eye. The fact is that as early as the 1990s when India first opened its doors to liberalization, there were already indicators that print and even electronic media is heading towards doom. It had already started happening in Europe and the United States. Digital was taking over. Readership of non-digital had crashed. But we Indians being what we are, ignored the symptoms. We were in denial.

Enter ABP. Instead of setting the trend in media and ushering in the digital era it decided to keep investing in the old way of doing business. Aveek Sarkar, the then editor-in-chief had great plans for expansion of business with more print content. The hiring kept happening. It was one big happy family. Then over the nearly three decades ABP’s budget deficit and losses ran to about Rs 100 crore according to sources in the marketing department. Editorial heads within the organisation though say the losses could be much higher. A red alert was sounded and private multinational firm Heys was hired to devise a plan to resuscitate the company.”

The top official confirmed to Outlook that Aveek Sarkar himself had to vacate the top post of editor-in-chief partly because he could not – or perhaps did not want to – reinvent himself and embrace the digital era in the way that a media magnate of his stature is expected to do. “He had hired all these people, who didn’t have anything to do. It was not their fault that the expansion plans did not take off. But they became redundant all the same. This failure compounded with the fact that in spite of his media running a negative campaign against the Trinamool Congress, the political party returned to power in the state with a thumping majority, his ouster paved the way for a change of management.” The new management, headed by Aveek’s brother Arup Sarkar and the latter’s son, Atideb Sarkar, according to the source, “has a completely different style of functioning.”

“At one level you have to understand that a company cannot continue to sustain losses. It is not a charitable institution,” said an editorial manager, speaking to Outlook in favor of the decision.

Yet the voices of support for what has transpired are drowned out by the sobs and screams of the over 700 employees who have been laid off in one swoop fell from ABP offices and bureaus across the country. There are the silent curses and the not-so-silent protests. “I refuse to resign. I spent my entire life working for this company.” If the ABP’s head office in Calcutta resembled what an employee likened to a “moratorium,” dramatic scenes were witnessed in its bureaus in Delhi where top editors and reporters were laid off. “The entire photo department was wiped out,” observed a photographer based in Delhi.

So who decided who goes and what were the determining factors?

“Some of the layoffs were not surprising because the employees were perceived to be ‘difficult’,” observed a reporter of The Telegraph. “But there were some huge surprises and even a few absolute shockers.” Explaining the process, decisions and criteria to Outlook, an editor of Anananda Bazaar Patrika, the Bengali language daily of the publication which is the highest selling vernacular newspaper in the eastern region, said, “At this point the decision had to be made taking into consideration several factors. Attitude of the employee – whether he or she was a trouble-maker – played a role. If he or she didn’t perform or was downright inefficient were of course major decisive factors. Colleagues were consulted and many were voted out.”

An editor of the Bengali newspaper said that “Even the people who were entrusted with the job of conveying the bad news to the employees were chosen with care. We secretly call them the ‘butcher’ and the ‘axe man or woman.’ The kinder, gentler bosses were spared from doing the dirty work and those with a certain ‘flair’ were given the task. They didn’t necessarily chose the stayers on the basis of eligibility but because they were in their ‘clique’. It was that dirty. You should expose this.”

If those who were given the axe have lost the voice to speak, those who made it by the skin of their teeth can only spew more venom. Friday, February 3, the day after ‘black Thursday”, is not like any other Friday. The dazzling white marble of the palacial offices of 6 Prafulla Sarkar Street looks kind of dull and grey in the pall of gloom that has descended over it this cold winter afternoon. An editor of the Bengali daily shakes his head, disapprovingly, “I think Aveek Sarkar would have done this differently. He adhered more closely to the tradition of his father Ashok Sarkar and grandfather, Prafulla Sarkar, the founding fathers of the media house. They belonged to that hallowed age of nationalism and were examples of humanitarian goodwill to their countrymen. Business IS about profit, no denying that, but it should not come at such a high cost, excuse the pun. The bad blood these layoffs have created will take a long time to fully be washed off.  And we all have blood in our hands because we could not save our colleagues.”