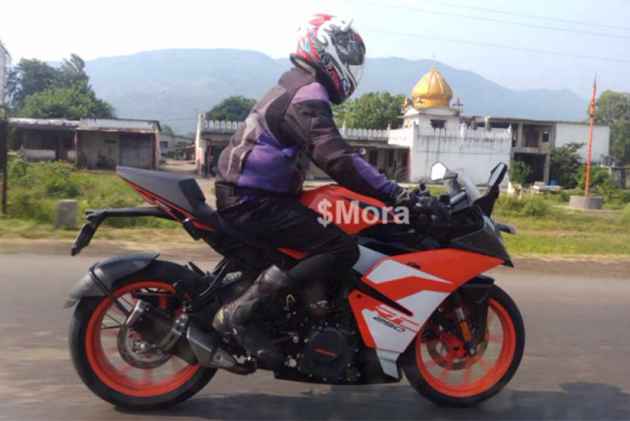 KTM pulled a proverbial rabbit out of the hat when it launched the KTM 250 Duke alongside the 2017 KTM 200 Duke and 390 Duke. The 250 Duke sat bang in the middle of the 250cc performance street bike segment and claimed to offer the best of both the KTM Dukes.

It was more or less expected that KTM would come out with a fully faired RC version of the 250 Duke. And, looking at the production-ready state of the test mule, we can say it will be launched sooner than you expect.

The RC 250 carries the same fairing and tail section as the RC 200 and RC 390. And while the orange and white graphics pattern are similar, the colour scheme differs. A sharper enthusiast should be able to differentiate between the three easily. The frame too is the older RC frame and not the new one that the 250 Duke gets. So, expect the bike to have the same, sharp handling traits as its RC siblings. Suspension components include upside-down 43mm WP forks and a WP rear monoshock damper. Brakes are Bybre units with what looks like a 300mm front and 230mm rear disc. Going by the visible ABS rings on the rear disc, we can safely assume that the RC 250 will get ABS, a setup which seems to be lifted off the previous generation Duke 390.

The motor will be the same 199.5cc liquid cooled single that does duty on the Duke 250. Expect similar outputs of 30PS and 24Nm.

The RC 250 will be the last of the current generation of bikes and we expect KTM to showcase the next-generation RC bikes at the upcoming EICMA motorcycle show in November. The next generation RC bikes might switch to the new frame, fairing and LED headlamps and also get that delicious colour TFT instrument console. We can't wait!