Kuldip Nayar Was Champion Of Democracy During The Emergency: Kovind

Apart from being an eminent journalist he was also the High Commissioner of India to the U.K. and was nominated member of the Rajya Sabha. 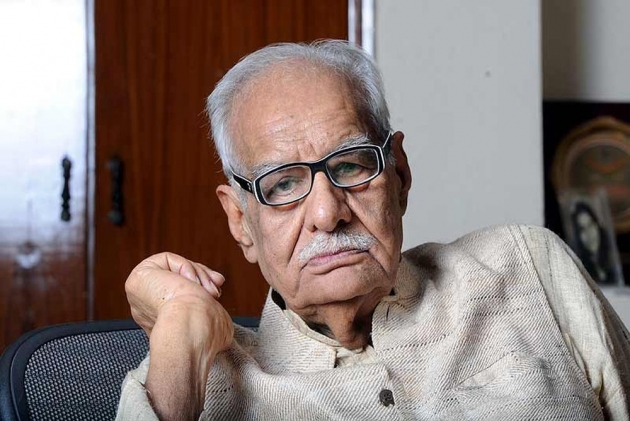 As prominent Indian journalist Kuldip Nayar (95) died in New Delhi on Thursday tributes from across all platforms started to make the rounds in social media.

Nayyar died at around 12.30 a.m. at a private hospital, his elder son Sudhir Nayyar told media. He is survived by his wife and two sons.

According to reports, he He was suffering from pneumonia. The last rites will be conducted at 1 p.m. at the Lodhi Road crematorium in New Delhi.

Apart from being an eminent journalist he was also the High Commissioner of India to the U.K. and was nominated member of the Rajya Sabha.

Renowned politicians and journalists paid their tributes to Nayar by twitting about Nayar's work. Prime Minister Narendra Modi in a tweet remarked that Nayar was "frank and fearless in his views."

Kuldip Nayar was an intellectual giant of our times. Frank and fearless in his views, his work spanned across many decades. His strong stand against the Emergency, public service and commitment to a better India will always be remembered. Saddened by his demise. My condolences.

President Ram Nath Kovind sent his condolences by twitting that Nayar was a "determined champion of democracy".

Sad to hear of the passing of Kuldip Nayar, veteran editor and writer, diplomat and parliamentarian, and a determined champion of democracy during the Emergency. His readers will miss him. Condolences to his family and associates #PresidentKovind

Pointing out at Nayar’s work during emergency Union Finance Minister Arun Jaitley in a tweet said that he will be “remembered for opposing the Emergency”.

Saddened by the death of the veteran Journalist Sh. Kuldip Nayar. His contribution to the cause of free speech is unparalleled. He is credited with breaking some of the most exclusive news stories. Will be best remembered for his struggle against the emergency.

Amit Shah, National President of Bharatiya Janata Party, also sent his condolences saying “His passing away is a loss to India’s journalism.”

My condolences on the sad demise of veteran journalist & former Rajya Sabha member, Kuldip Nayar ji. I had met him a few months back, he was full of energy and humor. Nayar ji's firm stand against Emergency can never be forgotten. His passing away is a loss to India’s journalism. pic.twitter.com/G0wCk2nsNZ

Saddened at the passing away of fearless, popular veteran journalist and author Kuldip Nayar. My condolences to his family, admirers and colleagues

Historian Ramachandra Guha said Nayar was a journalist “who followed the dictates of his conscience rather than the lure of money or fame”.

Sorry to hear of Kuldip Nayar's passing. As I wrote here, he was a journalist who followed the dictates of his conscience rather than the lure of money or fame:https://t.co/zn8AL2sSx3