Kuldip Nayar Spent All His Life As A Journalist With Considerable Distinction: S Venkat Narayan

Kuldip trained to be a lawyer and even failed in a journalism diploma course in a Lahore college, says S Venkat Narayan. 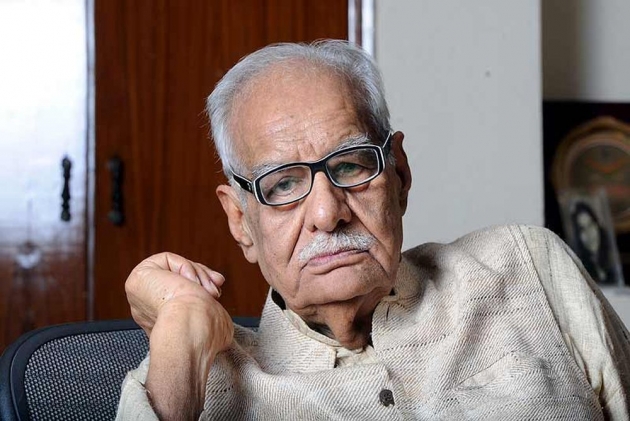 Kuldip Nayar was 20 years elder to me, but we became good friends at our very first meeting over lunch at Triveni Kala Sangham in New Delhi in the winter of 1975. I had just come back from London after a stint at The Sunday Times as a summer scholar, and invited him to tell him how I got into trouble because of him!

While in London, the then literary editor of The Sunday Times walked up to my desk one Friday afternoon with a bunch of page proofs of Kuldip’s book which was about to be published. He had just been arrested during the Emergency, and the famous London weekly, then edited by the venerable Harold Evans, wanted me to put together a news story about Kuldip.

I rushed through the page-proofs and put together a 300-word report, including a quote from Kuldip’s book in which he wrote something to the effect that, at cabinet meetings, Indira Gandhi used to treat her ministers like a haughty headmistress would treat students in her class!

Apparently, Mrs Gandhi didn’t like it. So, when I landed in Delhi, the cops rummaged through my bags over three hours, found nothing incriminating, and let me go. My worried wife and little son were waiting outside, wondering why the hell it was taking me so long to get out of the airport!

After I narrated this, Kuldip and I had a hearty laugh. I asked him: “Did you ever interview Mrs Gandhi?” He responded: “I never met her or asked her for an interview.” I said: Why not? He answered: “Because I thought she would never agree to see me.”

We kept in touch since then, off and on. Over a meal at the House of Ming at the Taj Mansingh, at a seminar, or a diplomatic do. The last time I met him was over a year ago, at the Bangladesh High Commission, where High Commissioner Syed Muazzem Ali was hosting a reception for his Prime Minister Sheikh Hasina.

Kuldip was using a stick and was accompanied by a helper to assist him. As we parted, he said: “You know, I am working on another book!” Apart from the thousands of columns, he wrote for some 80 newspapers, he also published 15 popular books. He co-authored one of them with Khushwant Singh, who had taught him in a Lahore college.

In December 1979, I had accompanied Mrs Gandhi on her campaign trail, travelled across India in a Fokker Friendship aircraft, watching her address dozens of election rallies. I then wrote a three-page article in India Today, the magazine I was working for at that time, ending it with a paragraph suggesting that she would come back to power with a massive mandate.

That week I bumped into Kuldip at a diplomatic party. He shook his head disappointingly, and said: “What have you done? You know nothing about politics! You say Mrs Gandhi is coming back to power? Forget it. That’ll never happen. And you have ruined your career as a journalist!”

Once we were together in Port Louis, Mauritius, to attend some event. When Sir Seewoosagur Ramgoolam, then Governor General, heard that Kuldip was in town, he promptly invited us to high tea at his fabulous ocean-facing mansion. It got a bit late when we returned to our hotel. A lackey of our host sheepishly asked if we would like some female company! We looked at each other and said: No. Thank you!

As we headed to our respective rooms, Kuldip quipped: “A tiger hunts his own prey!”

Kuldip trained to be a lawyer and even failed in a journalism diploma course in a Lahore college. When his Sikh mother put Rs 120 in his pocket and packed a reluctant 24-year-old Kuldip off to India on September 13, 1947, he had no idea what life had in store for him. He tried to join the IAS but failed to qualify. The first job he landed in Delhi was as a journalist on an Urdu daily, Anjaam. A reluctant entrant into the profession, he spent all his life as a journalist with considerable distinction! He had too many scoops to his credit for enumeration here.

One thing not many people may know even today is this:

While riots raged across India and Pakistan in August/September 1947 in the aftermath of the bloodiest Partition in human history, Mohammed Ali Jinnah was on a visit to Lahore. A minister and a journalist flew him over divided Punjab. Jinnah saw streams of people pouring into Pakistan or fleeing it. A desolate and shocked Jinnah struck his hand over his forehead and said despairingly: “What have I done?”

Apparently, Kuldip extracted that memorable but little-known quote from the journalist’s wife years after the scribe passed away.