"Those who oppose women's empowerment & laughter would melt soon. We all will have the last laugh." 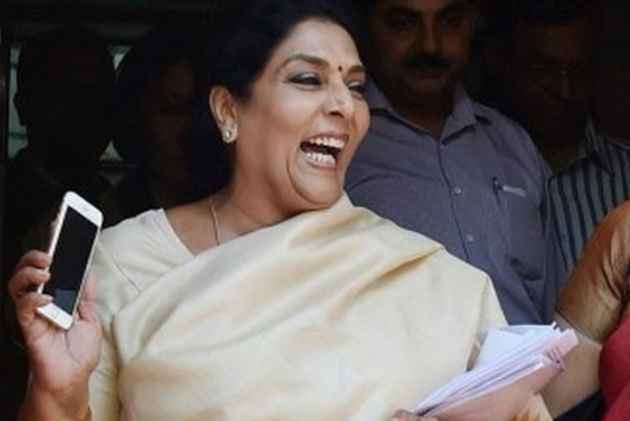 At a Parliament proceeding on February 8, Modi questioned the Congress's claim of being the originator of the biometric national ID Aadhaar by saying then Home Minister L K Advani had in 1998 spoken about an all-purpose national ID in Rajya Sabha, provoking laughter from Chowdhury.

Naidu had disapproved of the behaviour but Modi asked him not to stop Chowdhury.

"Sabhapati ji meri aapse vinti hai Renuka ji ko kuch mat kahiye. Ramayan serial ke baad aisi hansi sunne ka saubhagya aaj jaake mila hai (I request you not to say anything to Renuka ji. After the Ramayan serial, we got the privilege of hearing this kind of laughter only today," he said, to the amusement of top BJP leaders and other ministers sitting around him.

Chowdhury had protested the remarks but the chairman did not allow her comments to go on record.

"Laugh Renuka laugh! We love you, we're fond of you & wish you well. Don’t worry, be happy! Let them cry & shout hoarse. Things will settle down. Those who oppose women's empowerment & laughter would melt soon. We all will have the last laugh. Long live ‘Nari Shakti. Jai hind!," he tweeted.

At a book launch, he had said: “If a lawyer can speak about economics, TV actress can become HRD minister, and a tea seller can climb great heights by selling tea, an actor like him could surely speak on demonetisation and Goods and Services Tax (GST)”.

Even then, the BJP didn’t take any action against him, not even issued a show-cause notice.

The disgruntled party leader, who had recently joined Yashwant Sinha's 'non-political' platform 'Rashtra Manch', had also said that he was treated as a 'stepson' by the party. He was the health and family welfare and shipping minister during the Atal Bihari Vajpayee government,

"I seemed to serve no purpose beyond being an outspoken member of my parent party. I felt my parent party was giving me the treatment given to a stepson. Quite honestly I felt stifled," he was quoted as saying.

He had earlier defended Aam Aadmi Party leader Arvind Kejriwal over the disqualification of 20 of the party's MPs on a 'office of profit' case, and called the BJP a 'one-man army and a two-man show'.