A rapidly increasing coarseness of feeling and language against Ahmadis does not bode well for Indian Muslims in particular, and for India, in general. 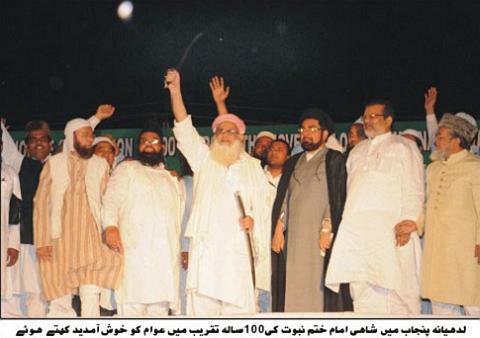 The above picture appeared in at least two Urdu newspapers on April 12. I captured it from Hamara Maqsad (New Delhi). Yes, the man sporting a long beard and angelic white robes is waving a sword. No, he is not a Saudi prince ready to launch into their traditional sword dance. He is a humbler being, but he does claim a link to some royalty, for he calls himself “the Shahi Imam of Ludhiana.” His name is Habibur Rahman Sani Ludhianvi. Among the grinning men standing beside him is his brother Atiqur Rahman Ludhianvi, who is also described as the “Punjab unit president of the Indian Muslim Council.” The two are the grandsons of a well-known and respected Ahrar leader of the past, Maulana Habibur Rahman Ludhianvi, and are described in the newspaper as celebrating the successful conclusion of their month-long effort labeled as the Movement to Protect the End of Prophethood, at a grand rally in Ludhiana on Sunday, the 10th of April, attended by several thousand to over one million Muslims, depending on which report in the same paper one wished to believe. Fourteen resolutions were unanimously approved. Of them the following six dealt with those Indian Muslims who may or may not call themselves Ahmadis but who are contemptuously referred to by their antagonists as Qadianis, after the birthplace of their founder in the Punjab:

Qadian, described as a class III town in the census, must be a backwater place. Its total population as reported in the 2001 census was 22,001. Perhaps they are all Ahmadis, peaceably living in a place that is of significance to them. There is no reasonable estimate of the total number of Indian Ahmadis, but it cannot be more than one lac (100,000). And no Ahmadi has ever been seen gleefully waving a sword or threatening the peace for his compatriots in any manner. (See here)

The community has, however, been used as a convenient ploy by any number of Muslim “leaders,” wishing to drum up support for their own delusions of power. The most notorious case, of course, was that of Z. A. Bhutto, who desperately tried to build up his political fortune in Pakistan by having the Ahmadis declared “Non-Muslim” by a generally elected parliament. Nothing so egregious has happened in post-1947 India, and may perhaps never happen, but it is not that Ahmadis have not been targeted in other ways by Indian Muslim fortune-seekers. Consider the following from my limited files.

In November 1997, Maulana Abul Hasan Ali Nadvi, the late rector of Nadvat-al-Ulama, Lucknow, organized a major convention at his institution against the Ahmadis, where it was urged to have them unlisted as Muslims. It was graced by no less a person than the Imam of Ka’ba at the time. Lucknow probably has 20 Ahmadi families in the city, but it has a large Shi’ah population. The late Maulana and his close friend Manzur Nomani were known opponents of the “Islamic” revolution in Iran and huge proponents of anything that pleased the Saudi regime. And so it was fair for me to assume, as I wrote then in a local daily, that the conference was actually aimed against Iran and the Shi’ahs, and was a sectarian gathering. That became clear when a letter appeared in the same daily from someone who praised the conference, denounced the Ahmadis, but complained that the people at Nadva had invited only those Muslim dignitaries “who belonged to a particular sect.”(The sect was not identified.)

In July or August 2010, there was much fuss in U.P. over the inclusion of the Ahmadis as a Muslim sect in some officially approved textbooks. It was another attempt to get them officially—albeit indirectly—declared “Non-Muslim.” (More information here) Some of the people involved in it were the President of Jami’at-i-Ulama-Hind, Qari Syed Md Usman Mansurpuri, the General Secretary of All India Muslim Personal Law Board, Maulana Nizamuddin, and the General Secretary of the All India Majlis-i-Mushawarat, Maulana Umiduzzaman Kairanvi. Maulana Abdul Khalique Sambhali of Deoband was reported to have demanded that the UP government remove the reference in the book and “cleanse the book committee of the Muslims who were enemies of Islam.” While the General Secretary of the Jama’at-i-Islami (Hind) claimed that the Ahmadi sect was a product of the Jews and the Christians, and that its leader lived in England was a clear proof of what he claimed. Needless to say, the present head of the sect fled from Rabwah in Pakistan many years back only to save his life, family, and the spiritual leadership of his people. (See my "Anti-Ahmadism in India")

A quick search through the archives of The Tribune of Chandigarh turned up the following incidents:

November 26, 2003: “Thousands of Muslims threatened to boycott the Congress in case one of the ministers in the government, according to them, did not stop supporting the Ahmadiya sect.”

December 24, 2005: “Activists of the All-India Majlis Ahrar (Party) today burnt an effigy of the Ahmediya religious head Mirza Masroor, who was recently on a visit to India. They also demanded the removal of the PWD Minister, Mr Partap Singh Bajwa, from the Cabinet for entertaining Mirza Masroor as a state guest.”

Incidentally, the supporters of the “Shahi Imam” Habibur Rahman Sani Ludhianvi seem to have a proclivity for making and burning human effigies. According to the reports in The Tribune, they indulged themselves in that fashion in February 2007 (Narendra Modi, Chief Minister of Gujarat), December 2007 (Aroosa Alam, woman journalist from Pakistan), and May 2008 (Madhu Koda, the Chief Minister of Jharkhand). Apparently the “Shahi Imam” and other Maulanas think that making human effigies is a fine Muslim activity so long as they also burn them after putting them on display.

Finally, glancing through the web editions of Sahafat (Lucknow) and Hamara Maqsad (New Delhi) today (April 25, 2011), I discovered that a committee, under the leadership of a Maulana Abdul Aleem Faruqi was touring the districts near Lucknow to drum up volunteers and participants for a rally on Tahaffuz-i-Namus-i-Sahaba (Protection of the Honour of the Prophet’s Companions), to be held in Lucknow on May 1. Meanwhile, a delegation of Iranian clergies had been in the city for three days, meeting with Shi'ah leaders concerning Shi'ah charities. (Sahafat) And someone named Ayaz Mahmud of New Delhi was given a full column to describe how the “Qadianis” were working as agents of the Christian and Jewish West in the latter’s plan to destroy monarchies in the Arab lands, it being the first step in their larger goal to destroy Islam. According to him, "The Qadianis have gained success in Tunis and Egypt, and are now targeting Yemen, Bahrain, and Libya. Next will be Iran and Pakistan.” (Hamara Maqsad)

What Habibur Rahman Ludhianvi did for four weeks before his big rally on April 10 was no different from what L K Advani did during his rath yatra before the fateful gathering in Ayodhya—fomenting hatred against a specific religious minority. While Ludhianvi was busy in the Punjab burnishing his image as a Muslim leader, there was also Maulana Arshad Madani busy shoring up his reputation by calling for a huge rally to protect not only the honour of the Prophet but also of his Companions, the latter being a code word for anti-Shi’ah activity. No need to guess who was his chief guest—the present Imam of Ka’ba, courtesy of the Saudi king, who wants support for his ambitions on the Arabian peninsula. (See M. Akram Nawaz’s essay on the subject)

The Ahmadis are Muslims, because they call themselves Muslims—that is the position under Indian law. If some other Muslims think otherwise, it too is their right. But if India functions by its constitution and laws, then the Ahmadis’ right to define themselves religiously as they think fit must be respected. And they must be given full protection of the Indian state, and not made to feel threatened by any foul-mouthing, sword-waving mullah. They are now openly hounded and killed in Pakistan. We must never allow anything remotely close to it to develop in India.

Atiqur Rahman Ludhianvi, the brother of the “Shahi Imam,” is also the chairman of the minorities department in the government of Punjab. He too attended the rally, where he was no less violent in denouncing the Ahmadis. I hope the Minorities Commission of India and one or two of the Civil Liberties groups in Delhi would take notice of things next door. I also hope the Sikh politicians in Punjab who joined hands with the Ahrars during the latest hateful campaign and received awards for their cooperation would give more thought to the consequence of their actions for their Ahmadi compatriots. Similarly I would urge the Muslim intelligentsia in India to learn from what happened in Pakistan.

What began there as a campaign against the Ahmadis eventually turned into a battle between different Muslim sects, leaving unsafe even the precincts of mosques and Sufi shrines. That the same scenario of sectarian hatred has not developed in India is not due to any lack of attempt. Read some of the writings of people like Abul Hasan Ali Nadvi and Manzur Nu’mani, go through the Urdu journals and pamphlets issued by various Muslims organizations, visit the cassette shops in Basti Nizamuddin and Abul Fazl Enclave in New Delhi, or flip through several Urdu dailies of Delhi, Lucknow, and Hyderabad, and you will find at the very least a rapidly increasing coarseness of feeling and language that does not bode well for Indian Muslims, in particular, and for India, in general.