Learning From Each Other

'Indian mathematicians learned something from Babylonians, Greeks and Romans, they also taught some brilliantly new ideas to mathematicians elsewhere in the world.' 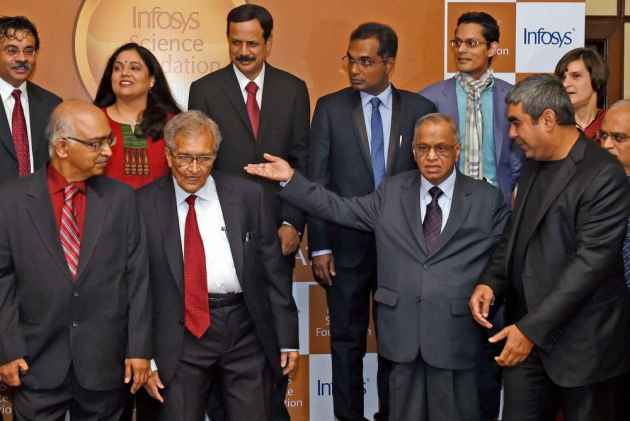 Full text of the Nobel laureate's speech at the Infosys Science Foundation Award meeting to honour the six winners in Kolkata, January 5

I begin by saying how sorry I am that Pranab Mukherjee, the President of India, whom I have the privilege of having as a friend, has been prevented by illness from coming here today. We wish him a quick recovery.

There are many different ways of achieving fame. Doing original and outstanding research that gets international recognition is perhaps the best. The winners of the Infosys Science Foundation awards are establishing this right now. We have just heard about their wonderful achievements, and we are all very proud of the work they have done. But there are also other ways of getting fame. Sitting on a chair intended for the President of India is an easy way of getting recognition, without the hardship of research. I am, in fact, quite overwhelmed by the accidental fame that has suddenly come my way.

I recollect another occasion when fame came to me accidentally. I was at a conference in Hanover in Germany and I was walking back from the conference site to my hotel, and stopped at a traffic light since it was red and disallowed pedestrian crossing. There was no car in sight, in any direction whatever, and I decided, after a hundred seconds of solitude, that it is extremely stupid to stand there doing nothing—without even a car to watch. I thought there was even the danger of my not being counted any longer as a proper Indian if I did not take the law into my own hands when needed (who knows, I might even lose my Indian citizenship).

So I made the obvious move of crossing the street, but then a gentleman on the other side of the street expressed his displeasure at my action, and told me, “Professor Sen, in Germany a pedestrian has to wait when the light is red. This is our rule, Professor Sen.” I was, of course, impressed by the reprimand I was getting, but even more impressed that my fame had reached as far as Hanover, to be recognised on the street. So I thought I must be nice to my distant friend, and asked the critic, as affably as I could, “Remind me where we met last.” To which the Hanoverian gentleman replied, “We have never met. And I have no clue who you are, but you are wearing your conference badge with your name on it.”

Name recognition can indeed be an uncertain guide to fame. However, the winners of the Infosys Science Prizes we are honouring today do not need—or very soon will not need—any conference badge to be recognized. They have done altogether outstanding work, as we have just heard in the citations. I congratulate each of them for their splendid work and their well-earned fame.

I am very proud of my own association with these Prizes. I have been a juror, indeed a jury chair, from the inception of these prizes. I remember very clearly the day when Narayana Murthy called me, to invite me to work with him on this enterprise. Murthy has been such a visionary leader of so many outstanding things that have happened in India, I knew of course, immediately, that this new project of rewarding research done on India—or by Indians - through these high-profile prizes would also be a great success (as indeed it has been). When Murthy called me I was at the campus—in fact at the ruins—of old Nalanda, and I was engaged in planning how to combine excellent teaching with outstanding research at the newly re-established Nalanda University (as indeed old Nalanda did so splendidly).

What Murthy was kindly inviting me to do involved the assessment of research, but implicitly it was about teaching as well. The skill of doing research, the hard preparation needed for doing new and original work—going beyond the old established knowledge, and indeed the courage to think in novel and daring lines are all immensely helped by good and exciting teaching. For me, this began at home. My grandfather Kshiti Mohan Sen, who taught at Santiniketan, could excite my interest in Sanskrit studies, including heretical texts in Sanskrit, which still inspire my engagement in that wonderful language, as I pick up a book in Sanskrit today. Sanskrit, we have to remember, is not only the language in which the Hindu and many of the Buddhist texts came, it is also the vehicle, among many other radical thoughts, of comprehensive doubts about the supernatural expressed in the Lokayata texts, and also the medium in which the questioning of class and caste and legitimacy of power would be expressed with spectacular eloquence by Shudraka in his profound play, Mricchakatikam (“The Little Clay Cart”). It was great for me to be taught at a very early age the distinction between a great language as a general vehicle of thought and the specific ideas—religious or sceptical—that may be expressed in that language. That distinction remains important today.

I also have to acknowledge my debt to my other teachers—in Santiniketan, at Presidency College, and at Trinity College in Cambridge—in helping me to find my way. I am sure the winners today would also be able to recollect how their own preparations for original research have been facilitated by the teaching they have received. I am delighted that in line with this understanding, the Infosys Foundation has initiated a new scheme for the training of rural teachers of mathematics and science. Since our school education is the basis of all our education—no matter how “high” our higher education maybe—the fruits of investment in good school education can be extraordinarily high. Narayana Murthy, who like me grew up in a family of teachers, knows that with visionary insight.

I also want to say a few things about the wider role of teaching—in linking different nations and different cultures together. Teaching is not just a matter of instruction given by teachers to their individual students. The progress of science and of knowledge depends in general on the learning that one nation—one group of people—derives from what has been achieved by other nations—and other groups of people. For example, the golden age of Indian mathematics, which changed the face of mathematics in the world, was roughly from the fifth to the twelfth century, and its beginning was directly inspired by what we Indians were learning from work done in Babylon, Greece and Rome. To be sure there was an Indian tradition of analytical thinking, going back much further, on which the stellar outbursts of mathematical work in India from around the fifth century drew, but we learned a lot about theorems and proofs and rigorous mathematical reasoning from the Greeks and the Romans and the Babylonians. There is no shame in learning from others, and then putting what we have learned to good use, and going on to create new knowledge, new understanding, and thrillingly novel ideas and results.

Indians of course were teaching other Indians. Perhaps the most powerful mathematician of ancient India, Brahmagupta, would not have been able to do such dazzling work without his having been influenced by the ideas of his own teachers, in particular Aryabhata, the pioneering leader of the Indian school of mathematics. Alberuni, the Iranian mathematician, who spent many years in India from the end of the tenth to the early years of the eleventh century (and helped to make Arab mathematicians learn even more from Indian mathematics than they were already doing) thought that Brahmagupta was perhaps the finest mathematician and astronomer in India—and possibly in the world—and yet (argued Alberuni) Brahmagupta could be so productive only by standing on the shoulders of the great Aryabhata, who was not only an extraordinary scientist and mathematician, but also a superb teacher. Learning from each other continued over centuries, involving - in addition to Aryabhata and Brahmagupta—Varahamihira and Bhaskara, among many others.

And just as Indian mathematicians learned something from Babylonians, Greeks and Romans, they also taught some brilliantly new ideas to mathematicians elsewhere in the world. For example, Yi Xing [I-Hsing], who lived in China between the seventh and the eighth century, and who was, as Joseph Needham describes him, probably the finest Chinese mathematician of his time, knew all the relevant Indian texts. The Chinese mathematicians as well as the pioneering Arab mathematicians, including Al Khwarazmi (from whose name the term “algorithm” is derived), all knew Sanskrit and the Sanskritic literature in maths. What we are admiring here is not Indian mathematics done in splendid isolation (that rarely occurs anywhere in the world), but mathematics done with a huge role of international and interregional exchange of ideas. Indian research was deeply influenced by the knowledge of foreign works on the subject, and in turn, Indian maths influenced mathematical work even in those countries, including Greece and Rome and Baghdad, from where Indians themselves had learned many things.

Let me end with an example. The history of the term “sine” in Trigonometry illustrates how we learn from each other. That trigonometric idea was well developed by Aryabhata, who called it jya-ardha, and sometimes shortened it to jya. The Arab mathematicians, using Aryabhata’s idea, called it “jiba,” which is phonetically close. But jiba is a meaningless sound in Arabic, but jaib, which has the same consonants, is a good Arabic word, and and since the Arabic script does not specify vowels, the later generation of Arab mathematicians used the term jaib, which means a bay or a cove. Then in 1150 when the Italian mathematician, Gherardo of Cremona, translated the word into Latin, he used the Latin word “sinus,” which means a bay or a cove in Latin. And it is from this—the Latin sinus - that the modern trigonometric terms “sine” is derived. In this one word we see the interconnection of three mathematical traditions—Indian, Arabic and European.

Teaching and learning are activities that link people together. Even as we celebrate science and research, we have to recognise the role of teaching and that of learning from each other—from our teachers, from our colleagues, from our students, from our friends, and from our fellow human beings. There is something extraordinarily great in these interconnections.

I end by congratulating the winners of the Infosys Prize this year, and all the learning, all the teaching, all the encouragement that lie behind their magnificent accomplishments.