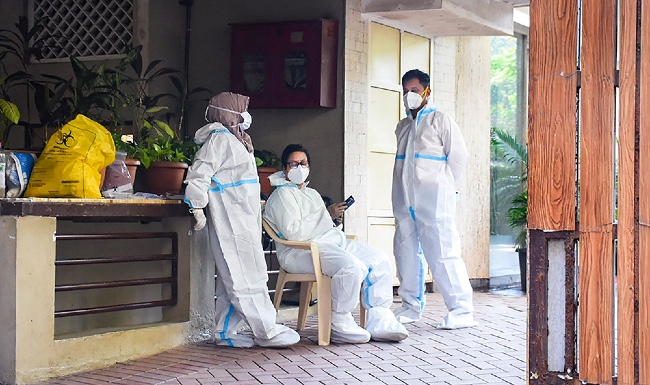 Amid a sudden spike in coronavirus cases in Jammu and Kashmir, Chief Secretary Arun Kumar Mehta on Wednesday reviewed the situation and asked the health administration to scale up testing to reach a target of two lakh tests per day.

The leave of all health staff including doctors and paramedics has been cancelled in view of sudden surge in COVID-19 cases in Jammu division, an official spokesman said. The health department was also asked to stock up on medical supplies and keep all equipment, machinery, and infrastructure in a state of readiness, the official spokesman said.

The chief secretary reiterated the need of promoting COVID- appropriate behaviour and directed the enforcement agencies to ensure adherence to the laid down guidelines. The chief secretary asked the departmental HoDs to establish direct communication channels with the medical teams and professionals and undertake an on-ground assessment of the situation and mitigation measures, besides raising awareness through interactive sessions and programmes on electronic and social media.

To closely monitor the rapidly evolving Covid situation in the union territory, a Crisis Management Group (CMG) under the chairmanship of the CS has been meeting regularly and taking appropriate preventing and mitigating measures for preventing infection surges in Jammu and Kashmir, he said.

Quoting an order issued by the Director Health Services Jammu, the spokesman said leave of all health staff including doctors, paramedics and other officials has been cancelled in view of sudden surge in Covid-19 cases in Jammu division. “Directions have been issued to all Chief Medical Officers and Medical Superintendents not to grant leave, except for Medical and Emergency conditions, to health care workers with immediate effect,” the spokesman said.

The decision to close the university located at Kakriyal near Katra town, the base camp for the pilgrims visiting Vaishno Devi shrine, was taken to contain the spread of the virus and ensure safety of the students and general public, an order issued by Reasi District Magistrate Charandeep Singh had said.